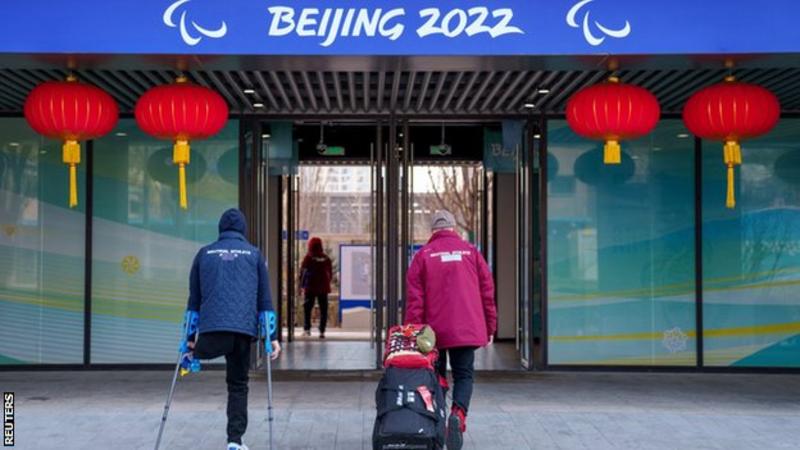 Athletes from Russia and Belarus will not be allowed to compete at the 2022 Winter Paralympics in Beijing.

The International Paralympic Committee was heavily criticised after initially allowing the athletes to compete as neutrals.

A statement on Thursday said the “situation in the athlete villages” had become “untenable”.

The Winter Paralympics begins on Saturday, with the opening ceremony taking place on Friday.

“We are very firm believers that sport and politics should not mix,” Parsons said.

“However, by no fault of its own the war has now come to these Games and behind the scenes many governments are having an influence on our cherished event.

“Ensuring the safety and security of athletes is of paramount importance to us and the situation in the athlete villages is escalating and has now become untenable.”

There were set to be 71 competitors from Russia and 12 from Belarus – plus guides for both nations – competing in Beijing.

Parsons said an “overwhelming number of members” had spoken to the IPC and said they would not compete in the Games should Russia and Belarus be allowed to.

On Wednesday, a number of governing bodies and political figures criticised the IPC for not immediately banning Russian and Belarusian athletes.

Nadine Dorries, UK Secretary of State for Digital, Culture, Media and Sport, called on the IPC to “urgently reconsider” its decision, while the US Paralympic Committee and the British Paralympic Association also expressed their disappointment.

A joint statement from the athletes of Ukraine and the Global Athlete group, an international athlete-led body that aims to inspire change in world sport, said the IPC had issued “another blow” to every Ukrainian athlete and citizen with their decision.

“They put Russia above the interest of other countries,” Heraskevych, who displayed an anti-war sign during the Beijing Games in February, said.

“Anything less than a full ban is unacceptable. It’s sad and heartbreaking.”

Parson said it was unlikely a viable Game could be carried out should Russian and Belarusian athletes be allowed to compete.

“To the Para-athletes from the impacted countries, we are very sorry that you are affected by the decisions your governments took last week in breaching the Olympic Truce,” he added.

“I hope and pray that we can get back to a situation when the talk and focus is fully on the power of sport to transform the lives of persons with disabilities, and the best of humanity.”

Ukraine has reported that more than 2,000 civilians have died since Russia began its invasion last Thursday.

Ukraine’s Paralympic team are in Beijing and will be able to compete in the Games, with Friday’s opening ceremony set to promote “a message of peace”.

A number of governing bodies from across sport have introduced measures to exclude Russian and Belarusian athletes, including banning the use of their flags and cancelling events.