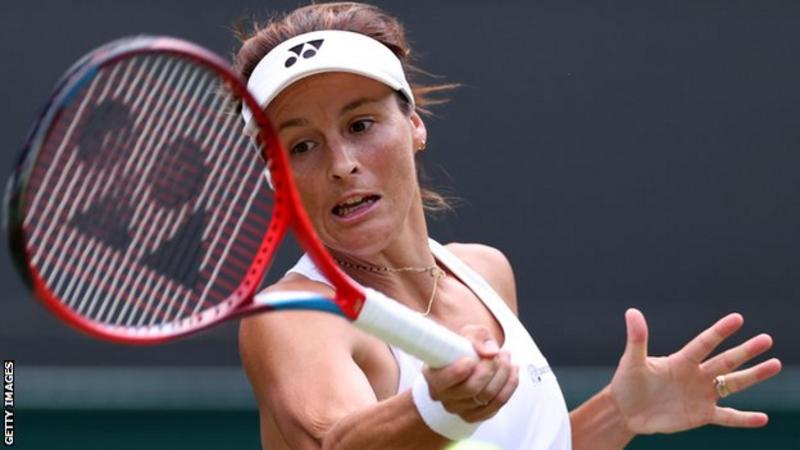 Maria, 34, was ranked outside the top 250 as recently as March and only returned to the tour a year ago after having her second daughter.

She will face either third seed Ons Jabeur – the highest ranked player left in the draw – or Marie Bouzkova next.

Maria dropped her racquet to the floor and stood with her mouth covered in disbelief after her victory was confirmed by a missed volley.

She ran to the net for a lengthy hug with Niemeier before thanking the crowd, still shaking her head in shock.

“I have goosebumps everywhere. I think today we made Germany really proud after our match.”

Maria says she would relish playing her good friend Jabeur, one of the favourites for the title, next.

“She is part of my family. She loves my kids, she is playing with them every day,” she said.

“It would be great to play her, we never know. But I am only happy that I am in a semi-final now.”

Maria is the sixth woman in the Open era to reach a Wimbledon semi-final after turning 34.

She had to do it the hard way, with Niemeier breaking in the first game of the match and looking more assured on serve and at the net.

Maria converted the second of three break points by dropping to one knee to somehow slice a backhand volley just over the net, drawing the Court One crowd to their feet.

She won five of the final six games to force a deciding set but, after a tight start, Maria grew frustrated and let out a scream of annoyance after being broken to fall 3-2 behind.

Having saved match points in the previous round against Jelena Ostapenko, Maria once again dug deep. With Niemeier serving for a 5-3 lead, she continued to push, and the result was a long Niemeier volley that sent the match back on serve.

With the crowd growing increasingly vocal – led by Niemeier, who raised her arms, asking them for support – Maria saved a break point, before converting her first match point on the Niemeier serve.

Two-time Grand Slam Tracy Austin called Maria’s run “a fairytale,” adding on BBC TV: “We watch sports to bring up emotions. A mother of two, outside the top 100, is into the semi-finals at Wimbledon.

“Your dreams can come true. It really is extraordinary.”