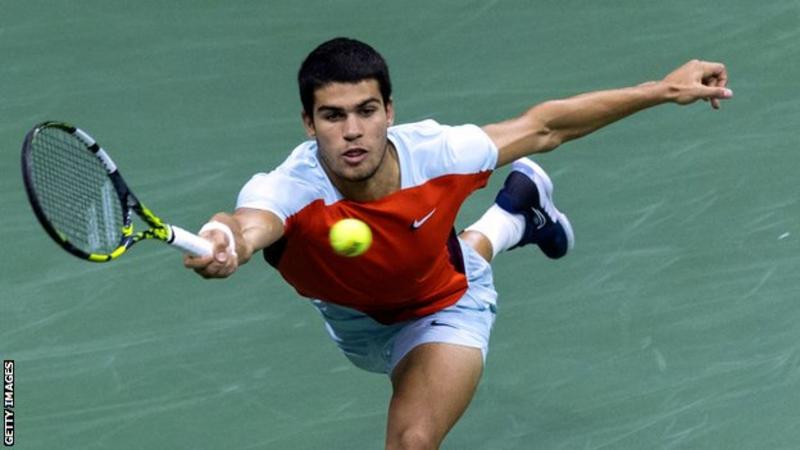 Alcaraz, 19, will play Norway’s Casper Ruud, who continued his own bid to land a first major by beating Russia’s Karen Khachanov earlier on Friday.

Whoever triumphs in Sunday’s final will become the new men’s world number one.

The champion will replace Russia’s Daniil Medvedev, who lost in the last 16 at Flushing Meadows, at the top of the ATP rankings.

Alcaraz has long been touted as a potential Grand Slam champion and now is one victory away from becoming the youngest man to win a major since Rafael Nadal at the French Open in 2005.

The teenager secured the opportunity by coming through another epic contest that showed his talent, athleticism and heart.

Beating 22nd seed Tiafoe, which took him more than four hours and four match points, was the third match in a row where he won a lengthy five-setter.

Tiafoe, 24, was aiming to become the first American man to reach a US Open final since Andy Roddick in 2006, taking the lead on his fifth set point in the opener when Alcaraz produced a double fault.

Alcaraz had not previously dropped the first set in the tournament, but fought back to lead by winning 10 of 12 games going into the fourth set.

Looking flat and weary at this stage of the match, Tiafoe twice fell a break down early in the fourth. But he recovered both breaks to re-energise himself – and the crowd – then saved a match point at 5-4 with a nerveless drop shot.

Tiafoe had won all seven previous tie-breaks he had played at Flushing Meadows this fortnight – equalling a record set by Pete Sampras in 2000 – and made it eight to ensure there would be a deciding set.

After coming back from 2-0 down, Tiafoe hit a double fault to lose his serve for 3-2 and Alcaraz seized the initiative.

An inch-perfect lob from the Spaniard had helped turn the fifth game and he produced another to bring the fourth match point which he converted when Tiafoe hit a backhand into the net.