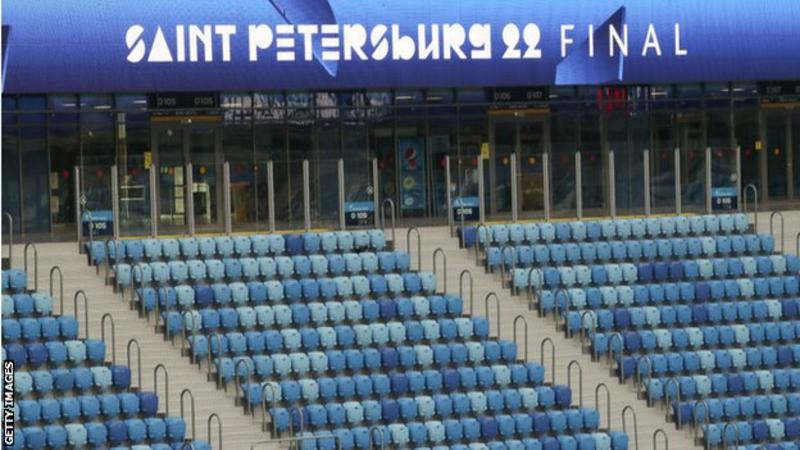 UEFA will take the 2022 Champions League final away from St Petersburg following Russia’s invasion of Ukraine.

The decision will be made at Friday’s emergency meeting of European football’s governing body.

FIFA president Gianni Infantino says football’s world governing body has “a duty to look into the footballing consequences of what is happening”.

With Russia and Ukraine both scheduled to play World Cup play-off matches in March the military action was part of discussions during a FIFA council meeting on Thursday.

FIFA said it would monitor the situation and communicate updates on the qualifiers in due course.

“FIFA condemns the use of force by Russia in Ukraine and any type of violence to resolve conflicts. Violence is never a solution and FIFA calls on all parties to restore peace through constructive dialogue,” Infantino said.

Russia is set to play Poland on 24 March, while Scotland host Ukraine on the same day.

Ukraine’s domestic football league was set to resume this weekend after a winter break but that will remain suspended. Fifteen of the most recent 23-man Ukraine squad play in their homeland.

Sweden is also in the play-offs where they will meet the Czech Republic. The winner of that tie could meet Russia for a place at the World Cup finals, which get under way in Qatar in November, if they win their semi-final. Karl-Erik Nilsson, the chairman of the Swedish Football Association, told Reuters a match in Russia was “almost unthinkable” at the moment.

Later on, Thursday, a joint statement was issued by the Polish, Czech and Swedish FAs telling FIFA that the play-off matches should not be played in Russia.

The statement says the countries will not travel there due to safety concerns and want “immediate” action over alternative locations.

FIFA president Infantino said the letter will be looked at “as a matter of urgency” and added that the FIFA Bureau has the power to “take a decision at any time”.

“The first match is in one month from now, we hope that this whole situation will be solved before then,” Infantino said. “We want to strongly believe in that.”

Former Chelsea and AC Milan striker Andriy Shevchenko – who is Ukraine’s all-time record goal scorer and was manager of the national team for five years – called on Russia “to stop their aggression and violation of international law”.

“My people and my family are under attack,” he wrote in a post on Instagram. “We only want peace. War is not the answer.”

The Champion’s League final was set to be played at the Gazprom Arena in St Petersburg on 28 May but UEFA has known an escalation in the situation between Russia and Ukraine would make it impossible to stage the match.

Overnight developments have made that certain and UEFA president Aleksander Ceferin has called an emergency executive committee meeting for Friday, when the decision will be confirmed.

UEFA is in the process of evaluating alternatives but is now committed to changing the venue of its most prestigious club game at short notice for the third year running.

Zenit St Petersburg’s game on Thursday will go ahead, UEFA has confirmed. They face Spanish side Real Betis away in the Europa League at 20:00 GMT.

In Ukraine, football at all levels has been suspended and the Ukrainian FA has said it will appeal to prevent any Russian national or club teams participating in “any international competitions under the auspices of FIFA and UEFA”.

“We remain resolute in our solidarity with the football community in Ukraine and stand ready to extend our hand to the Ukrainian people,” UEFA said in a statement.