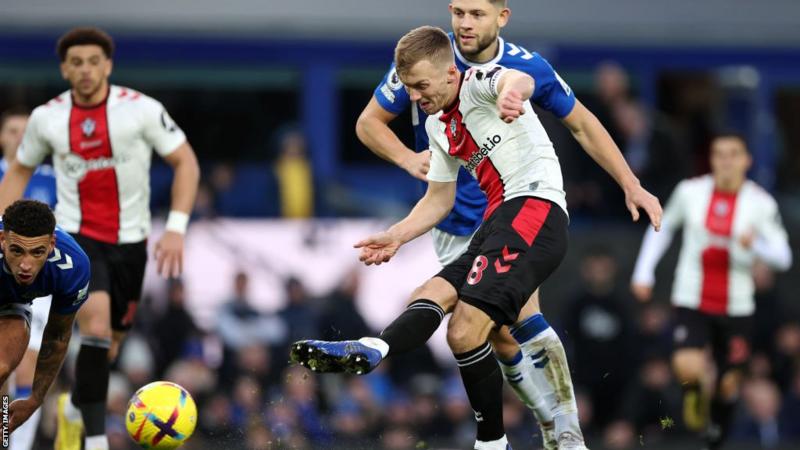 James Ward-Prowse scored a stunning free-kick as Southampton came from behind to win and increase the pressure on Frank Lampard and Everton.

A season of frustration has seen the Toffees once again struggling at the wrong end of the table, and the discontent among the fans was clear at Goodison Park with banners displayed in protest at the club’s owners.

Indeed, there was enough concern at the club for the safety of their board members that they were told to stay away from the ground.

The fans, though, were clearly behind their players, welcoming them to the ground with an incredible scene of blue flares and passionate chanting.

That support was rewarded just before half-time when, after a half low on quality from both sides, Everton took the lead when Amadou Onana headed home Demarai Gray’s superb cross.

But Southampton, who shocked Manchester City in the Carabao Cup on Wednesday, turned it around in the second half thanks to Ward-Prowse.

He slotted in the equaliser after great footwork inside the box and, after Everton’s Dominic Calvert-Lewin hit the crossbar, Ward-Prowse secured a huge three points for the Saints with a free-kick late on that left Jordan Pickford stranded.

The result means Southampton stay bottom of the table but are level with Everton on 15 points and are just one point from safety.