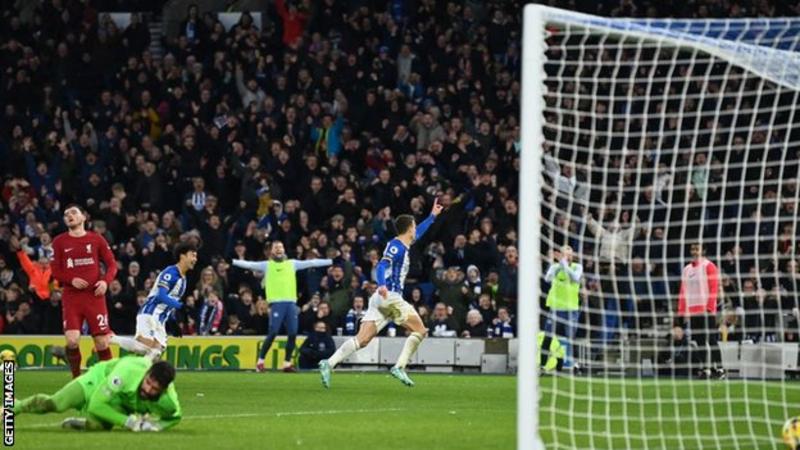 Brighton moved above Liverpool in the Premier League standings as Solly March’s double and a late Danny Welbeck strike condemned Jurgen Klopp’s side to a dismal defeat at Amex Stadium.

March converted Kaoru Mitoma’s low cross to give the home side a deserved lead, after the returning Alexis Mac Allister had intercepted Joel Matip’s loose pass.

The winger then doubled the hosts’ advantage with a fabulous left-footed strike from Evan Ferguson’s through-ball.

Second-half substitute Welbeck capped a magnificent Brighton display with a superb finish past Alisson after flicking the ball over Joe Gomez.

Roberto de Zerbi’s team dominated the first half but failed to convert their pressure into goals, Trent Alexander-Arnold blocking March’s effort near the goal-line and the lively Mitoma poking wide from a tight angle.

Brighton thought they had won a penalty shortly before the break when March went to ground in the area under Alisson’s challenge, but referee Darren England overturned his initial decision to award a spot-kick after consulting with VAR.

It mattered little, however, as March netted his third and fourth goals of the campaign before Welbeck struck to lift Brighton up to seventh – one place and two points above their opponents.

Defensive frailties and a lack of physicality have proved Liverpool’s undoing in recent weeks, with Klopp’s side conceding poor goals in defeat at Brentford in the Premier League and a draw at home to Wolves in the FA Cup last weekend.

The visitors, lining up in a 4-3-1-2 formation spearheaded by Cody Gakpo and Mohamed Salah, managed to keep free-flowing Brighton at bay in the first half but created next to nothing themselves and were fortunate to go into half-time on level terms.

Mitoma, in sparkling form for Brighton of late, caused Alexander-Arnold and Matip countless problems, with Salah – or any other Reds player for that matter – failing to offer any protection down their right flank.

Liverpool survived a major let-off when Brighton were awarded a penalty for a foul on March by Alisson, only for VAR to rule that the winger had strayed offside from Adam Lallana’s pass.

But the visitors’ luck ran out in the second half as March scored twice in the space of seven minutes to put Brighton on course to a fifth win in seven top-flight games.

Gakpo had a close-range effort saved by Robert Sanchez late on, but Welbeck delivered the final blow with a strike that combined skill and audacity in equal measure.