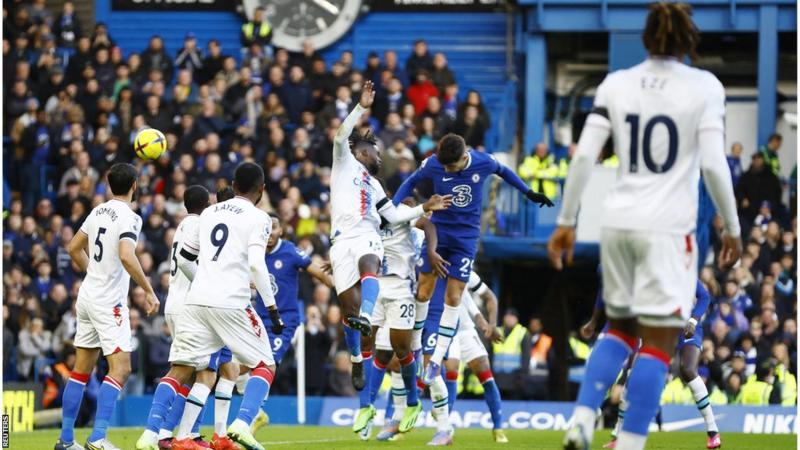 A thumping header from Kai Havertz earned Chelsea a narrow victory over Crystal Palace to ease the pressure on manager Graham Potter.

Havertz met Hakim Ziyech’s cross shortly after an hour as the Blues ended a run of three successive defeats in all competitions.

The Germany striker should have doubled Chelsea’s advantage but could only flash a header wide from close range from Mason Mount’s cross.

Palace came close to equalising late on when Cheick Doucoure’s long-range volley was spectacularly tipped over by Kepa Arrizabalaga.

Chelsea stay 10th despite the win, just their second in 10 Premier League games, but are now level on points with ninth-placed Liverpool.

Palace are 12th after a fifth defeat in six games in all competitions.

This was far from a convincing performance by Chelsea but the relief was palpable at the final whistle as they avoided the ignominy of losing four successive matches in all competitions for the first time in 30 years.

The goal arrived when Palace lost concentration from a corner allowing Conor Gallagher to play the ball short to Ziyech, whose curling cross was buried past Vicente Guaita by Havertz for his sixth goal of the season.

Chelsea had struggled for many clear-cut openings up to that stage, with Havertz heading over and Lewis Hall flashing a first-time shot across goal during a tame first half.

Thiago Silva then made several key defensive headers in stoppage time as the Blues clung on during nine nervy minutes of stoppage time.

The west London club have also been boosted by the arrival of Ukraine forward Mykhailo Mudryk, who was paraded on the pitch at half-time after confirmation of his transfer from Shakhtar Donetsk.