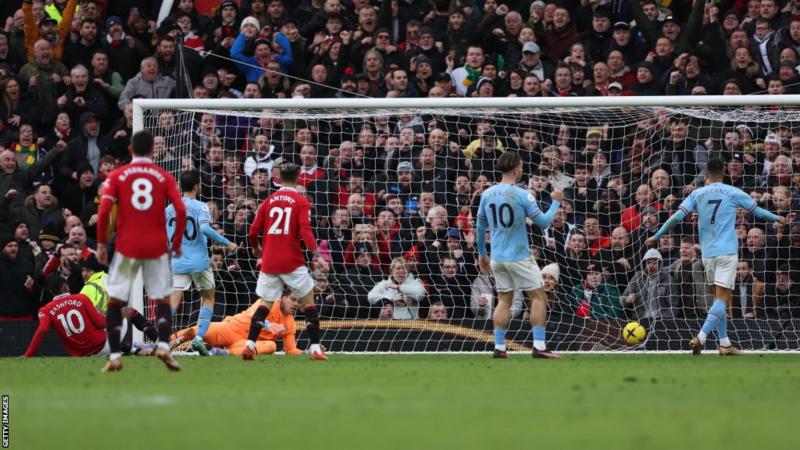 Manchester United staged a stunning late turnaround to come from behind and beat Manchester City in a dramatic derby at Old Trafford.

City looked to be closing the gap on Premier League leaders Arsenal after substitute Jack Grealish headed them in front from Kevin de Bruyne’s cross on the hour, only for United to send their fans into raptures with a superb recovery.

Erik ten Hag’s side drew level in contentious fashion with 12 minutes left as Bruno Fernandes scored despite the presence of Marcus Rashford in an offside position, City’s protests that he had interfered with play ignored despite the flag going up.

Rashford was the central figure again four minutes later when he swept in substitute Alejandro Garnacho’s cross at the Stretford End to move United to within one point of City, who remain five points adrift of Arsenal.

United left Etihad Stadium in early October chastened and bruised following a 6-3 thrashing, a scoreline that actually flattered them – but Ten Hag insisted lessons had been learned.

And so they have. This win means United have lost only one of their past 19 games in all competitions and are now on City’s heels in third place in the table, barely credible after that derby beating and a dreadful start to the season that saw them lose at home to Brighton before being overwhelmed at Brentford.

The debate over Fernandes’ equaliser will go on, but what is inescapable is the significant improvement under the disciplinarian and tactically astute Ten Hag to the point where United are looking solid in the top four and may even be casting a glance at leaders Arsenal, who are six points ahead of them.

The sight of the diminutive Luke Shaw winning a series of headers in among Erling Haaland and others in stoppage time and Raphael Varane fist-pumping and whipping up the fans at the final whistle was a sign of the renewed belief and confidence surging through United.

The reborn Rashford was not deterred by missing two first-half chances to pounce and turn Garnacho’s cross past exposed City keeper Ederson for the winner.

United’s recovery has been slow but assured under Ten Hag and the scenes at the final whistle demonstrated that a giant that had lost its way is slowing finding itself again.