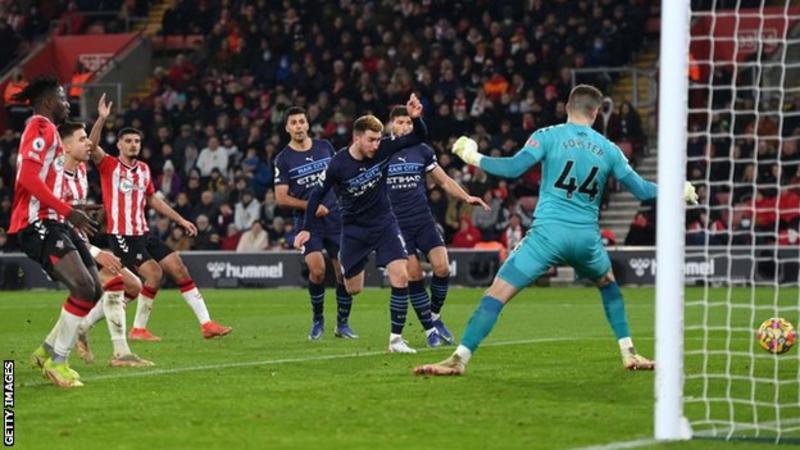 Pep Guardiola says Manchester City’s 12-point lead at the top of the Premier League is beyond his expectations, despite dropping points for the first time since October as Southampton held on for a hard-earned draw at St Mary’s.

City had won 12 games in a row to open a considerable advantage over Liverpool and Chelsea before that fine run came to an end on Saturday.

Kyle Walker-Peters scored a superb seventh-minute opener for Southampton following a neat one-two with Nathan Redmond, touching the ball into his path before firing beyond Ederson on the bounce.

But Kevin de Bruyne curled a free-kick onto the head of Aymeric Laporte and the unmarked defender nodded past Fraser Forster to level with 25 minutes remaining.

De Bruyne hit the post moments later while Rodri and Gabriel Jesus also struck the woodwork. Forster denied Raheem Sterling too with his legs at close range from a glorious chance in the first half.

The result gives a flicker of hope to City’s rivals, who can both make up ground when they play on Sunday, though Guardiola says even if his side had won, the title race is “not over in January”.

Second-placed Liverpool have two games in hand before their visit to Crystal Palace while Chelsea, in third, host Tottenham.

Southampton, who are now unbeaten in eight games at home in the top flight, sit 12th in the table. 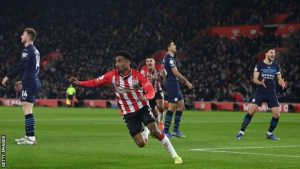