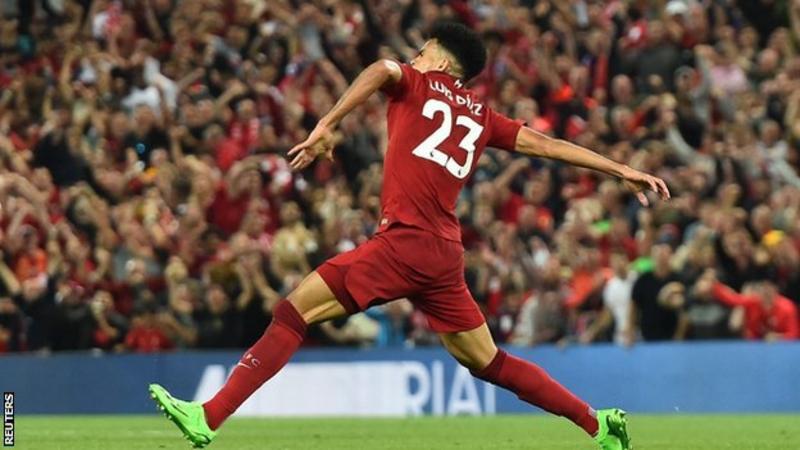 Luis Diaz rescued a point for Liverpool against Crystal Palace after new summer signing Darwin Nunez was sent off in his first Premier League game at Anfield.

Liverpool dominated possession in the first half but Palace went ahead through Wilfried Zaha’s clinical finish from Eberechi Eze’s superb pass.

Expensive striker Nunez had been desperate to make an impact in front of the Kop, but was deservedly shown a red card by referee Paul Tierney after 57 minutes when he reacted to a shove from Joachim Andersen with a headbutt that floored the Palace defender.

Liverpool responded in defiant fashion with a brilliant equaliser from Diaz four minutes later, cutting in from the flank before flashing a right-foot finish past Vicente Guaita.

The inevitable siege ensued, with Mo Salah and substitute Fabio Carvalho just off target. But Palace had a golden chance of their own when Zaha struck the far post when he should have scored, as Liverpool remain without a win from their first two games.

Darwin Nunez has made an excellent impression in his early days at Liverpool following his move from Benfica, scoring in the Community Shield win against Manchester City and also getting on target in the opening weekend draw at Fulham.

Here, he left Anfield with his head bowed after a totally inexcusable moment of ill-discipline that reduced Liverpool to 10 men and weakened their attacking impetus.

Nunez may have been wound up by Andersen but what followed was idiotic and expensive as he thrust his head straight into the Palace defender, leaving Tierney with no option but to send him off.

The brilliant Diaz stepped into the breach with a moment of magic for the equaliser while Harvey Elliott was also outstanding before he was substituted.

Liverpool had moments towards the end but was uncomfortable when Palace pressed, so had to settle for a draw that already leaves them four points behind expected title rivals Manchester City.