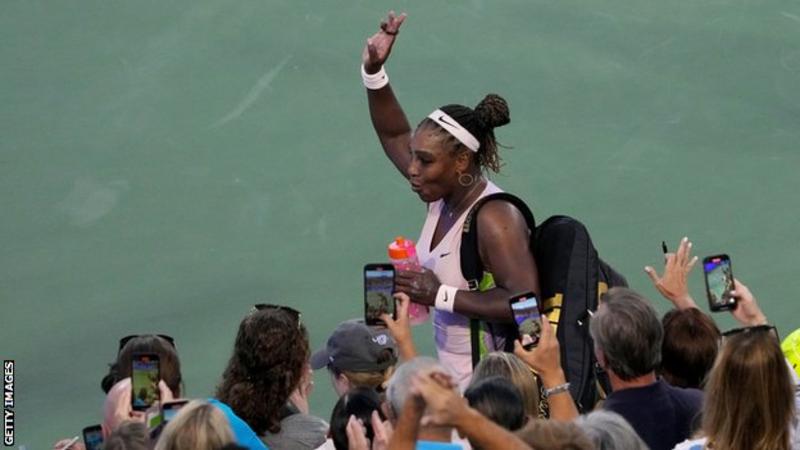 British number one Emma Raducanu put a dampener on Serena Williams’ farewell tour after thrashing the American great in the Cincinnati Open first round.

Williams, 40, plans to retire after the US Open, which starts on 29 August, and lost 6-4 6-0 in what is set to be the penultimate event of her career.

The 23-time Grand Slam champion lacked sharpness and her 19-year-old opponent punished her in a composed display.

Reigning US Open champion Raducanu will play Victoria Azarenka in round two.

“I’m so grateful for the experience to have been able to play Serena and for our careers to have crossed over,” said world number 13 Raducanu, who played superbly with her defence of the Grand Slam title in New York looming.

“Everything she has achieved has been so inspirational and it was a true honour to share the court with her.”

Evans, 32, reached the Montreal semi-finals last week but was unable to sustain that form at the second successive ATP Masters event.

Fellow Britons Andy Murray and Cameron Norrie meet in the second round at 16:00 BST on Wednesday, followed on the centre court by Raducanu’s match against Belarus’ former world number one Azarenka.

Ever since Williams announced her impending retirement last week – or her evolution away from the sport, as she put it – there has been the swell of acclaim which her legendary status deserves.

The respect of the locker room for Williams has been demonstrated in the following days, with world number one Iga Swiatek and Raducanu among the WTA players lavishing praise on the American’s achievements and her legacy.

Four-time major champion Naomi Osaka, who lost in the tournament earlier on Tuesday, cheered on her hero from the stands as Williams took on a player who was not born when she won her first four major titles.

But Williams showed, as many great athletes have in the past, which time has the knack of showing them up on the stages where they once dominated.

There had been reports Williams’ preparation was hampered by an injury in the build-up to the match, which was originally advertised to be played on Monday but then moved back to Tuesday.

Whether she was bothered by a physical problem or not, Williams was unable to cope with the pressure caused by Raducanu’s serve and ground strokes.

Now, after waving goodbye to Cincinnati with a smile, the six-time US Open champion must try to regroup for what she will want to be a more fitting farewell at Flushing Meadows. 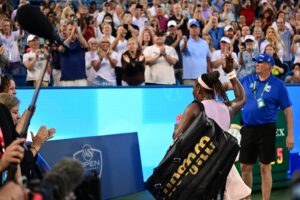