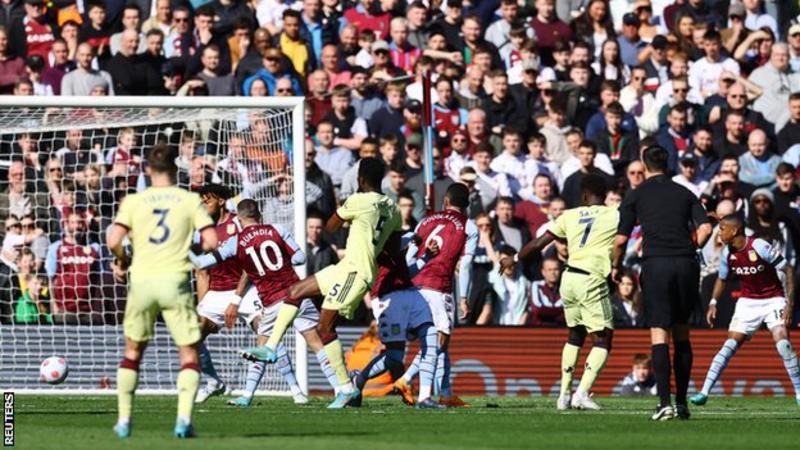 Arsenal manager Mikel Arteta praised the “character, courage and quality” of his team as they strengthened their grip on fourth place in the Premier League with a narrow victory at Aston Villa.

Bukayo Saka was the standout player as the Gunners secured a sixth win from seven games to move four points clear of fifth-placed Manchester United with a game in hand.

The England international scored the only goal in the first half with a low drive from the edge of the area after Villa failed to properly clear a cross into the box.

“You can see the connection they have. It is phenomenal to watch,” Arteta told BT Sport.

“If you want to be a top team, you have to win home and away. We are doing that consistently and we have to continue. We really want [to finish in the top four] and we are going to give it a go.”

Villa improved after the break and went close when Ollie Watkins’ deflected shot clipped the outside of the post, before substitute Danny Ings sent a looping header on to the roof of the net.

Arsenal’s jubilant celebrations at the final whistle showed just how significant they feel this result could be as the north London club seek to return to the Champions League for the first time in five years.

The win was based on a vibrant first-half display, followed up by a resilient defensive performance after the break.

Saka was excellent during the opening 45 minutes, tormenting 39-year-old Ashley Young who was in the Villa side for the injured Lucas Digne.

Villa did improve after the break but failed to put the Arsenal backline under any sustained pressure, with the attacking threat of forwards Coutinho and Emiliano Buendia stifled by the visitors.

John McGinn went close with a curling effort from distance while their best opportunity fell to Watkins, whose effort from inside the area struck Kieran Tierney’s knee before clipping the outside of the post.

The defeat means any European challenge now looks unlikely, with 10 points separating them and Wolves in eighth.

But a first Premier League top-10 finish in 11 years is definitely achievable and would be a sign of the progress made under Gerrard, given they were two points above the relegation zone in 16th when he was appointed in November.

“I don’t think teams like Arsenal are a step too far,” added the former Rangers boss. “But there is a gap we need to close. We are working on that.”