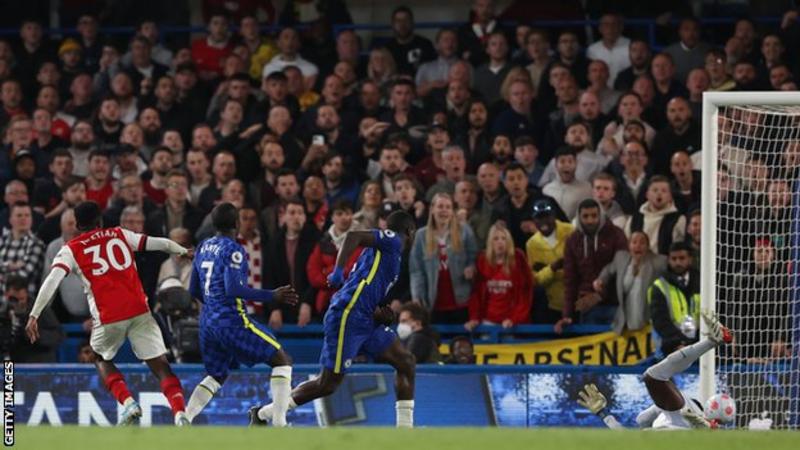 Arsenal got their pursuit of a place in the Premier League’s top four back on track as they ended a run of three defeats with a crucial victory at Chelsea.

The Gunners’ hopes of securing a place in next season’s Champions League had been significantly damaged by those losses but this win will provide renewed belief.

Eddie Nketiah was selected ahead of out-of-sorts Alexandre Lacazette in Arsenal’s attack and he rewarded manager Mikel Arteta’s faith when he took advantage of Andreas Christensen’s header with a composed finish in the 13th minute.

It was the start of a chaotic first half as Timo Werner equalised with a deflected shot four minutes later before Emile Smith Rowe showed a real touch of class to beat Chelsea keeper Edouard Mendy from the edge of the area.

Chelsea were back on terms again before the break through captain Cesar Azpilicueta but Nketiah pounced on a series of defensive errors to put Arsenal back in front after 57 minutes.

Bukayo Saka was outstanding for Arsenal and he got the reward his performance deserved when he sealed the win from the spot in added time after he was hauled down by Azpilicueta.

The Gunners are now level on points with north London rivals Tottenham with a derby at Emirates Stadium still to come.

Questions about Arsenal’s character and ability to maintain a fight for a top-four finish were starting to be asked after three damaging defeats but this was a display showing plenty of grit.

Arsenal were brave and on the front foot right from the start, pressing Chelsea into mistakes and refusing to buckle even when Thomas Tuchel’s side equalised twice.

Nketiah was the headline-grabber with two goals but Saka and Smith Rowe showed Arsenal have two real gems for the future.

Saka gave Marcos Alonso a tough time on Arsenal’s right flank, helping to create Smith Rowe’s goal, setting up other chances then scoring the fourth with a penalty after he was fouled.

Smith Rowe demonstrated great composure to finish smoothly for his 11th goal of the season, a fine tally for this richly promising 21-year-old playmaker.

Arsenal now face struggling Manchester United at Emirates Stadium on Saturday lunchtime feeling much better about themselves after a deserved triumph.