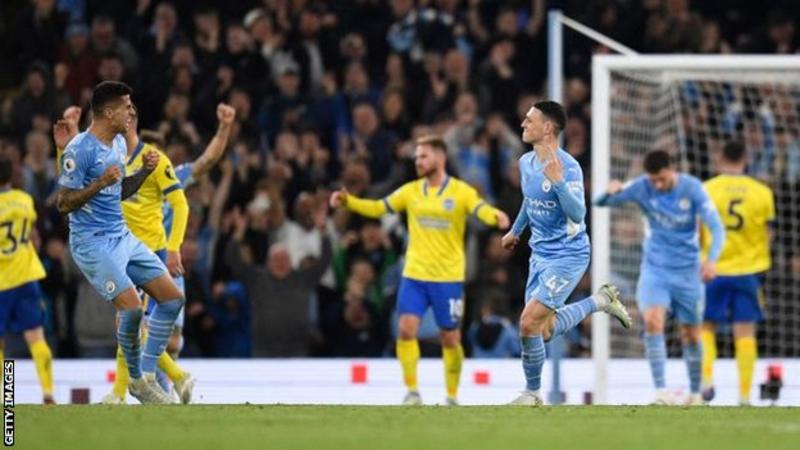 Manchester City leapfrogged Liverpool back to the Premier League summit thanks to three second-half goals against Brighton.

After struggling to break down Graham Potter’s men in a frustrating opening period, Kevin de Bruyne provided the inspiration as City restored their one-point advantage.

De Bruyne created the opener for Riyad Mahrez and provided the faint final pass for Bernardo Silva to wrap up the scoring eight minutes from time.

In between, Phil Foden needed the aid of a deflection to beat the Brighton goalkeeper after Mahrez spotted the England man on his own just outside the box at a corner.

The goals relieved building tension around Etihad Stadium and leave City knowing six more wins are now required for Pep Guardiola’s men to retain their title, starting with the home game against relegation-threatened Watford on Saturday.

De Bruyne did not get his name on the scoresheet but the standing ovation he received as he was replaced by Gabriel Jesus shortly after Bernardo’s goal said everything about the Belgian’s contribution.

With frustration mounting in the stands, De Bruyne took direct action eight minutes after the restart.

He set off on a surging run from inside his own half and the determination to make an impact meant he kept going when twice he could easily have stopped to claim free-kicks.

Instead, he kept his feet and shrugged off a third challenge before running the ball on to Mahrez. The Algerian profited from a couple of fortunate deflections, first to give him the shooting opportunity before a second took it past Robert Sanchez.

This was the Algerian’s 250th Premier League appearance and he helped boss Guardiola to his 250th win as City’s boss.

After Foden doubled the hosts’ lead, De Bruyne was the key man again as Bernardo added a third, deftly flicking on Oleksandr Zinchenko’s pass after the Ukrainian – earlier given a warm reception on only his second home appearance since the Russian invasion of his homeland – had taken advantage of Brighton hesitancy inside their own half.

After his injury scare during the Champions League quarter-final second leg with Atletico Madrid, Guardiola will want to keep De Bruyne as safe as possible for the remainder of the campaign.

The same, presumably, is also true of central defender Ruben Dias, who was introduced at half-time after a seven-week absence with a hamstring injury and seemed to shrug off fears from the bench he had suffered a recurrence.