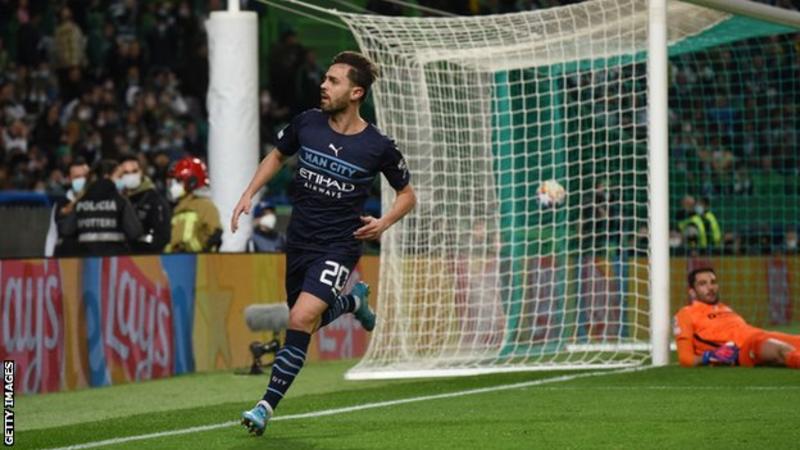 Manchester City effectively sealed their progress to the quarter-finals of the Champions League with a stunning last-16, first-leg demolition of Sporting Lisbon in Portugal.

As they have done for much of this season, City put on a majestic display to give themselves a surely unassailable advantage in a tie against what had been a buoyant and reinvigorated Portuguese champion.

Bernardo Silva was brilliant, silencing the boos that greeted every touch from him and City’s three other former Benfica players with his side’s second and fourth goals, the first a glorious half-volley following a corner.

In-form Riyad Mahrez was on the scoresheet again with a close-range finish awarded via VAR after a lengthy delay to assess if Kevin de Bruyne had strayed offside in the build-up as originally ruled.

Phil Foden also added to his growing collection of cool, calm finishes in a relentless first half that shattered Sporting.

There was no let-up after the break, with Silva seeing a hat-trick headed goal ruled out for offside before he set up Raheem Sterling to curl in a lovely fifth.

The result equals the biggest winning margin in an away match in the Champions League knockout phase and gives City their joint biggest European away victory, level with the 5-0 win at Steaua Bucharest in the play-off round of this competition in 2016-17.

Sporting will travel to Manchester for the formality of the second leg on Wednesday, 16 March.