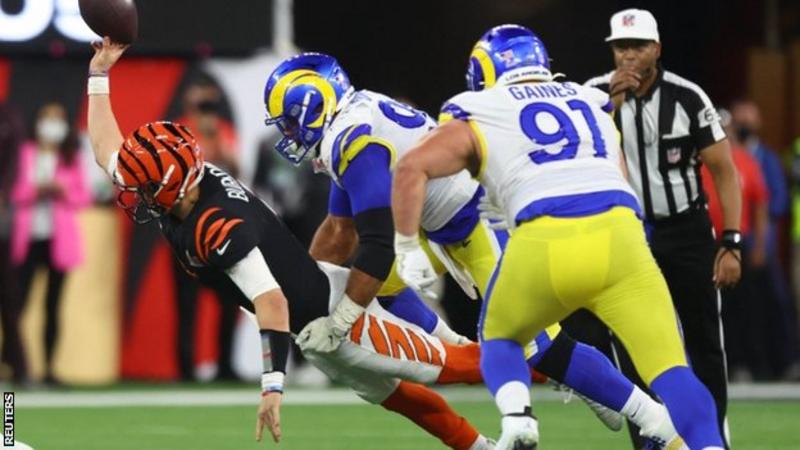 The Los Angeles Rams claimed a late touchdown to beat the Cincinnati Bengals 23-20 in Super Bowl 56.

The Bengals looked set to win their first Super Bowl – just two years after being the NFL’s worst team.

But the Rams’ star-studded roster produced when it mattered most, with quarterback Matthew Stafford leading a game-winning 15-play drive.

With just 1:25 left, Cooper Kupp scored his second touchdown of the game to give the Rams their second NFL title.

Kupp was then named the game’s Most Valuable Player, adding to the Offensive Player of the Year award he won last week.

With the game taking place at SoFi Stadium, the Rams are just the second team to win a Super Bowl in their own stadium after the Tampa Bay Buccaneers achieved the feat last year.

Victory vindicated the Rams’ decision to return to Los Angeles from St Louis six years ago.

Although they reached the NFL’s championship game at the end of their third season back in California, losing to the New England Patriots, they then traded away a flurry of future draft picks to rebuild their squad.

Built at a cost of $5bn by Rams and Arsenal owner Stan Kroenke, the SoFi Stadium earned the right to stage the first Super Bowl in the LA region since 1993 and the Rams went all in to ensure they were part of the big show.

And the gamble paid off as they not only reached their fifth Super Bowl but delivered a Hollywood ending.

The Rams gave up significant draft capital to bring in Stafford, linebacker Von Miller and cornerback Jalen Ramsey, while Odell Beckham Jr was picked up as a free agent in November.

And it is Stafford and Beckham, in particular, who have enjoyed a new lease of life in LA after being starved of success with their first teams, the Detroit Lions and New York Giants respectively.

And Beckham’s second opened the scoring on the Rams’ second possession of Super Bowl 56, before Stafford made an 11-yard touchdown pass to Stafford to make it 13-3 early in the second quarter.

The Bengals hit straight back to make it 13-10 but, on the Rams’, next possession Beckham dropped a catch and immediately clutched his left knee.

The star receiver was unable to return to the game and the defences took charge after the Bengals went 20-13 up early in the third quarter.

LA eked out a field goal and, with 6:13 on the clock, Stafford knew this was the time to show the Rams were right to trade Jared Goff and three draft picks for him last March.

With the Super Bowl on the line, the 34-year-old relied on the man he helped to secure the receiving triple crown of most catches, yards and touchdowns in the regular season.

Stafford found Kupp five times on the drive, capped by his third touchdown pass to put the Rams back in front. He finished with 283 passing yards.

Then defensive tackle Aaron Donald stepped up to seal victory, making a tackle to stop the Bengals getting a first down before forcing Joe Burrow to throw the ball away under pressure on fourth and one. The three-time Defensive Player of the Year finished with two sacks and three quarterback hits.