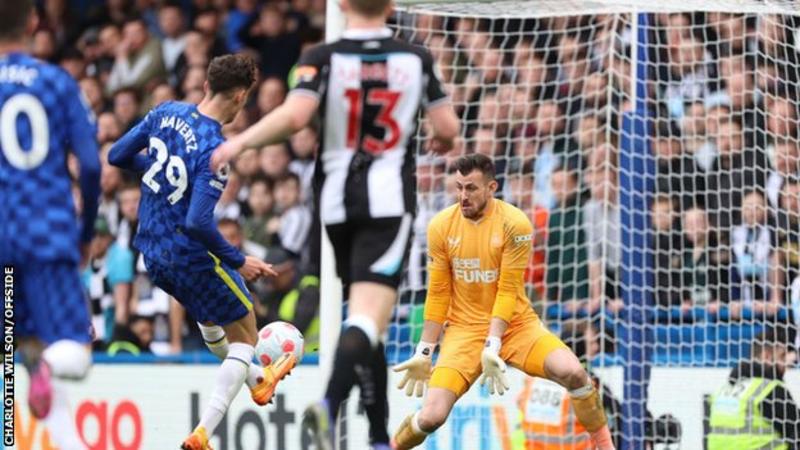 Chelsea snatched a dramatic winner against Newcastle in the first game at Stamford Bridge since Blues’ Russian owner Roman Abramovich was sanctioned by the UK government.

The game looked to be heading towards a goalless draw before Kai Havertz expertly controlled a ball forward and fired into the net in the 88th minute.

It was a tough goal to concede for Newcastle who had wanted Havertz to be sent off in the first half for catching Dan Burn in the face with an elbow when jumping, but the German only received a booking.

Before the goal, both sides had struggled to create clear-cut chances, with Chelsea taking 75 minutes to produce an effort on target.

Just as had happened in Chelsea’s 3-1 away win over Norwich on Thursday, a small section of fans chanted Abramovich’s name, for a brief period in the second half.

Abramovich has been sanctioned as a part of the government’s response to Russia’s invasion of Ukraine, meaning his assets, including Chelsea Football Club, have been frozen.

Chelsea stay third, but are now only seven points behind second-placed Liverpool and 10 adrift of leaders Manchester City. Meanwhile, Newcastle, beaten for the first time in nine Premier League matches, are 14th, 10 points clear of the relegation zone.

The relief and delight shown from Chelsea boss Thomas Tuchel, both at the goal and again at the final whistle, showed what this meant to him by screaming at the fans and punching the air.

And it was easy to see why he was so emotional with the club’s very existence potentially under threat.

Abramovich has been the Chelsea owner for nearly 19 years, a period in which they have won 21 trophies, including the Premier League on five occasions and the Champions League twice.

But the current sanctions against him have stopped him selling Chelsea, and mean the club are unable to buy or sell players, cannot sell any more tickets for games, have had their credit cards suspended and have had to close the club shop.

The government said it would issue a special licence that allowed fixtures to be fulfilled, staff to be paid and existing ticket holders to attend matches, although the club’s wage bill stands at £28m a month.

It seemed fitting that Newcastle, another side with hugely controversial owners following their takeover in October by the Saudi Arabian-backed Public Investment Fund (PIF), were Chelsea’s opponents on a day when events off the field were talked about as much as those on it.

Newcastle’s takeover and the potential huge investment into the club was celebrated by their fans a few months ago, although Amnesty International said “it represented a clear attempt by the Saudi authorities to sports wash their appalling human rights record with the glamour of top-flight football”.