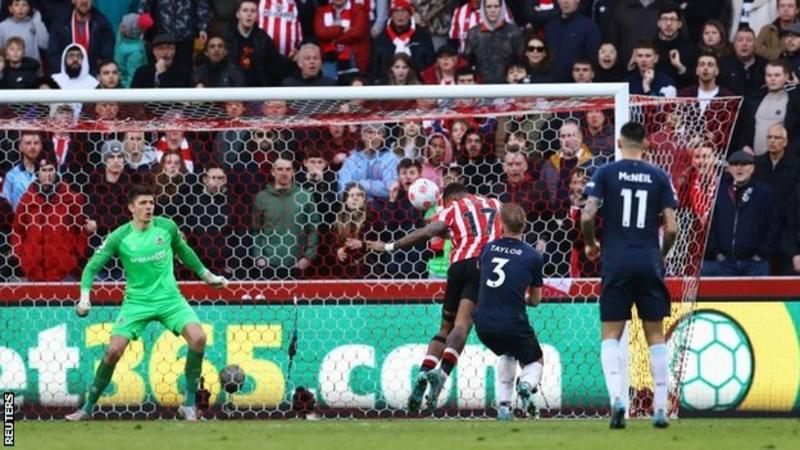 The Clarets looked set to move out of the bottom three until Toney headed in Christian Eriksen’s lovely cross with four minutes to go.

Toney then won a penalty deep into injury time, with Nathan Collins sent off for bringing him down, and he slammed in the spot-kick to seal the win.

Burnley remain a point behind 17th-placed Everton, who have two games in hand, while Brentford are now nine points clear of the Clarets.

Burnley always seem to get out of relegation trouble despite poor starts but their six-year spell in the top flight has rarely been in such danger.

Back-to-back wins in February – along with victory over Brentford in October their only wins of the season – have been followed up by one point from four games.

Sean Dyche’s side either need to win more games in the last 11 matches of the season than the first 27 – or else hope Leeds and Everton, who have both changed managers recently, keep losing.

They created nowhere near enough chances to win, with Cornet’s tame finish and Rodriguez’s thunderous strike the only moments resembling chances.

Meanwhile, Toney is singlehandedly dragging Brentford to safety – with five goals in the past eight days against teams in the relegation zone.

His hat-trick took care of Norwich in a 3-1 win last weekend and he now has eight goals in his past six games.

Thomas Frank’s side move on to 30 points and this season teams are unlikely to need to reach the 38-point mark to stay up.

They were far from spectacular but they did have other chances.

Eriksen, making his first home start, had a 20-yard deflected shot saved by Nick Pope and Vitaly Janelt headed over the bar.