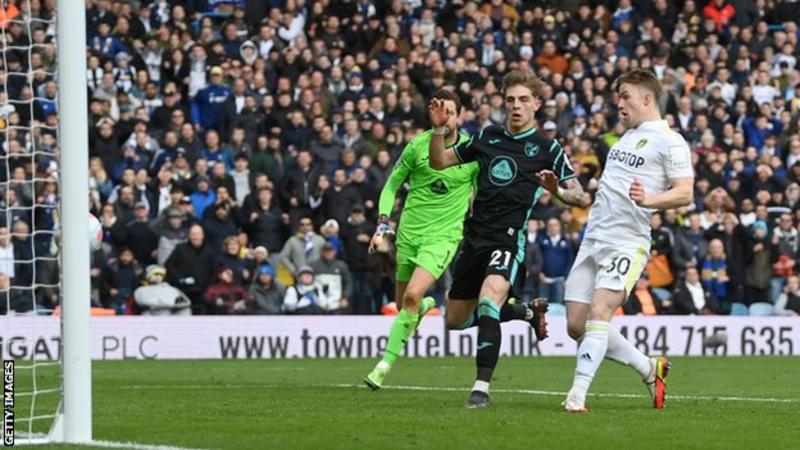 The 19-year-old substitute – on the pitch for less than two minutes – turned into an empty net from Raphinha’s assist, serving a brutal blow to Norwich after they had finally levelled through Kenny McLean at the start of injury time.

The thrilling finale served up scenes of contrast as Leeds’ fans jubilantly sang along to Kaiser Chiefs’ ‘I predict a riot’ while Norwich players sat dejected on the turf.

Rodrigo’s first-half goal had looked set be enough to see Leeds end a run of six games without a win but on a day where Raphinha twice struck the bar and where the impressive Daniel James went close, they almost paid for not taking their chances.

Norwich may point to Patrick Bamford appearing to be offside in the build-up to Rodrigo’s opener and they also saw a penalty award overturned shortly before they equalised when referee Stuart Attwell visited the pitch-side monitor.

Ultimately they found a way to level, stunning the Leeds support, but Gelhardt’s contribution moves Marsch’s side four points above the relegation zone while Norwich stay bottom – five points from safety.

Marsch summed the finish up as “very frantic”, adding: “I’d heard a lot about the magic of Elland Road and we felt that today.”

Gelhardt said his decisive goal delivered an “unbelievable feeling”, while team-mate Stuart Dallas said “this is why you play football, for moments like this”. Dean Smith’s Norwich players wore a look of how key this remarkable finish may prove to their survival hopes.

Norwich’s hopes of survival have been hindered greatly by what is now a six-game losing run, but none of them are likely to sting as much as this.

In the final moments Smith sent goalkeeper Tim Krul forward for a corner in search of another equaliser and striker Teemu Pukki forced a vital save from Illan Meslier in the kind of frenetic ending that pointed to what was at stake.

Marsch deserves credit for his role in the late mayhem as he moved to introduce Gelhardt for Mateusz Klich at a point where the life had been sucked out of the stadium.

When Raphinha rounded Krul the Brazilian was able to give Gelhardt a simple task to lift the gloom that had set in after a 3-0 midweek defeat to Aston Villa.

Against Villa, Leeds suffered the blow of losing four top-flight games in a row without scoring for the first time since March 1982.

It prompted Marsch to state “this is a business for men” and that the way out of relegation trouble would be paved with “courage and belief”.

They showed plenty early on as Rodrigo drilled home via a deflection, Raphinha volleyed against the bar and Pascal Struijk turned over from close range after seeing an initial header saved.