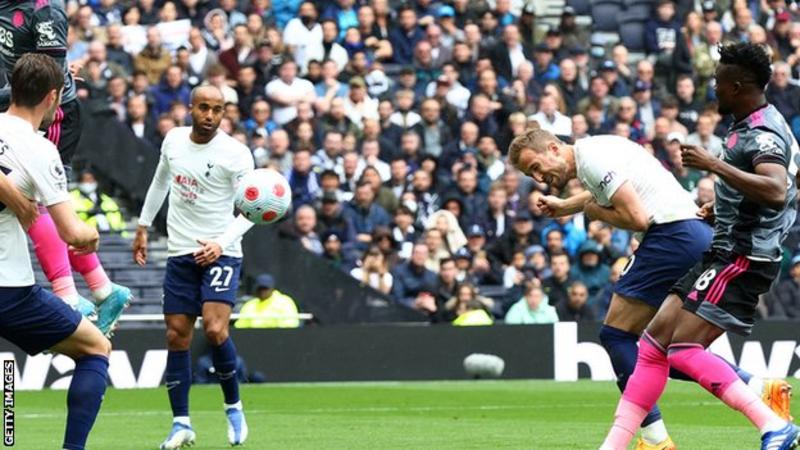 Son Heung-min scored twice and Harry Kane rediscovered his touch in front of goal as Tottenham beat Leicester to boost their hopes of a top-four Premier League finish.

Kane, goalless in his previous five Spurs games, headed in the opener from Son’s corner.

Son stroked in the second after being picked out by Dejan Kulusevski, then curled in a sensational third.

Leicester’s Kelechi Iheanacho scored a consolation with a crisp strike.

Spurs moved into fourth place at the expense of Arsenal, who play at West Ham later on Sunday.

“It was a great, great afternoon, a great match and a great performance from the team. We totally deserved it,” said Son, who has scored 19 league goals this season.

With upcoming matches against title-chasing Liverpool and top-four rivals Arsenal, Tottenham knew the importance of returning to winning ways against a Leicester side with more pressing priorities this week.

Spurs had not won either their two previous matches, punished for a sluggish display in a home defeat by Brighton and unable to break down a stubborn Brentford last weekend.

What was most startling about those performances, considering the amount of attacking talent at their disposal, was Spurs’ inability to record a shot on target in either game.

But Antonio Conte’s side led at half-time at Tottenham Hotspur Stadium with their only effort on target, then rediscovered their attacking verve after the break.

Their trusted combination up front delivered for the first when Son clipped a corner towards the near post, where Kane had escaped his marker Daniel Amartey to power in.

“We scored early in the first half and that changed the game – (we) knew we’d have more space in the second half,” said Son.

The start of the second half was also tight before Son – helped by the running and guile of Kulusevski, introduced as a substitute after surprisingly being left on the bench – ensured there was no way back for Leicester.