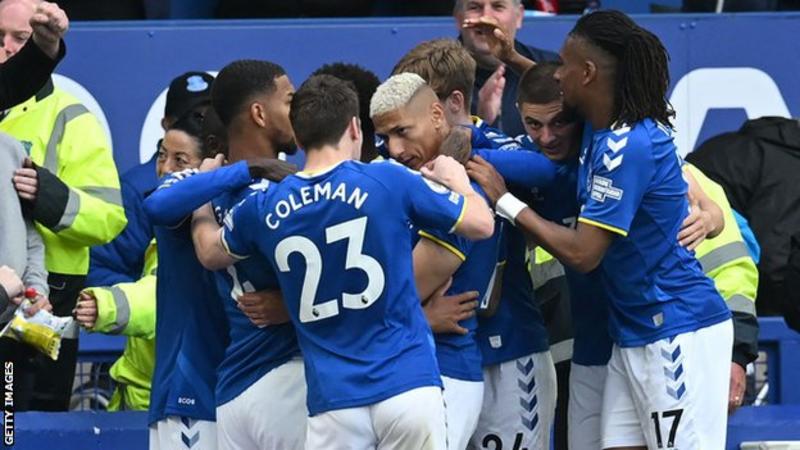 Everton moved to within two points of the Premier League safety zone with a priceless win over Chelsea that was inspired by a thunderous atmosphere at Goodison Park.

Starting the day in the relegation places, five points behind Leeds and Burnley, the hosts were lifted by their fans in their attempt to extend a 58-year stay in the top flight.

Everton’s aggressive pressing was eventually rewarded a minute after the break when Richarlison’s dispossessed Cesar Azpilicueta on the edge of the area and scored his ninth goal of the season.

The Brazilian celebrated by picking up a flare that had landed on to the pitch and throwing it back towards the stand.

Vitalii Mykolenko could have doubled the lead soon afterwards but skewed wide, and Everton were indebted to two stunning saves from Jordan Pickford to keep themselves in front.

First, the Everton keeper denied Azpilicueta after Mason Mount’s shot hit both posts and spun out. From the resulting corner, Pickford then took Antonio Rudiger’s shot fully in his face, needing medical treatment.

It was an incredible effort from the England stopper, who also saved from Ruben Loftus-Cheek, but typified Everton’s approach as they dug in to thwart Thomas Tuchel’s side, even if that raw approach drew complaints from the German.

Demarai Gray and Anthony Gordon could have made the game safe late on, but Frank Lampard saw his side hold out against his former employers, to earn only his fourth win in 13 Premier League games in charge.

The victory was vital, reducing the gap behind Leeds and Burnley, with the Toffees having a game in hand on their relegation rivals.

Chelsea, meanwhile, will rue the fact they could not turn their possession into goals, with their preparations hampered by fireworks being set off during the night outside their hotel.

Tuchel said they had not affected his team’s preparations, but was left to reflect on a defeat that could hamper their chances of finishing third. Arsenal can climb to within three points of them by winning at West Ham later on Sunday.