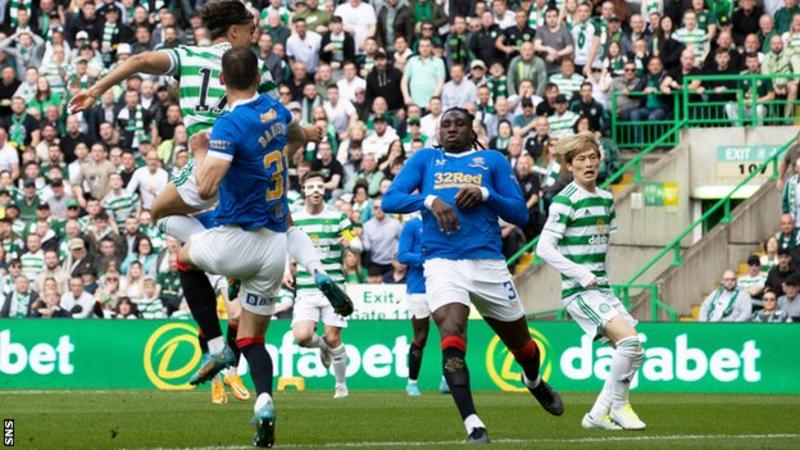 Celtic inched closer to a 52nd Scottish title despite being held to a draw at home by nearest challengers Rangers.

Ange Postecoglou’s side stay six points clear with only three games remaining and with a near insurmountable 19-goal advantage over the Premiership holders.

With the visitors looking out on their feet, Fashion Sakala fired them level to prolong the title race.

Giovanni van Bronckhorst had gone into the game admitting that it was a must-win game for his Rangers side, who are between legs in their Europa League semi-final with RB Leipzig.

Now unbeaten in 29 league games since September, Postecoglou’s side effectively only need three points from their three remaining games – at home to Heart of Midlothian and Motherwell and away to Dundee United – to officially secure Celtic’s 10th title in 11 years.

Rangers had turned the tables on their Glasgow rivals to win last month’s Scottish Cup semi-final to ensure there would be no domestic treble for the League Cup winners and champions elect.

Van Bronckhorst, though, faced a dilemma of whether to make wholesale changes ahead of Thursday’s attempt to overcome a 1-0 deficit with Leipzig.

It should have led to an opening goal when Ryan Kent stole in front of Anthony Ralston to meet a James Tavernier cross but could not find the target from 10 yards.

Celtic were shaken but showed Rangers how it should be done after a similar move minutes later as forward Daizen Maeda’s cross into the six-yard box found Jota darting in front of Borna Barisic at the back post to prod home.

Jota had a great chance to add to his 12th goal of the season when found free inside the penalty box by Reo Hatate’s through ball, but this time the on-loan Benfica winger headed wastefully over.

With Rangers looking increasingly hesitant, the unmarked Maeda also missed a golden opportunity as he headed clear from five yards from a Jota chip.

A Sakala header struck Matt O’Riley’s back in front of goal and Connor Goldson shot wastefully over as Rangers started the second half as they had the first, while Maeda again scooped over at the other end.

Just when Rangers’ heavy European schedule looked to be catching up with them, Kent set up Sakala for a low drive inside goalkeeper Joe Hart’s near post.

Almost immediately, another Sakala drive stung Hart’s fingertips and the Zambia striker should have done better than head over from 12 yards.

A late Hart double save from Scott Arfield and Kent, then a Sakala shot against the inside of a post, denied Rangers the victory they needed to really revive the title race. 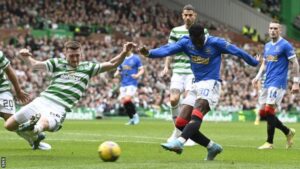