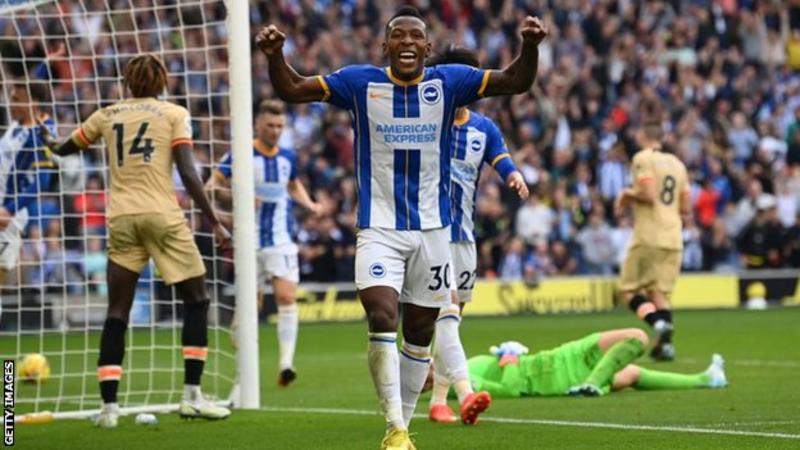 In a chaotic opening, Leandro Trossard’s calm finish put the home side in front after Thiago Silva – who had already produced two goal line clearances to deny the Seagulls – surrendered possession cheaply in his own half.

Two own goals extended Brighton’s lead before the break, Ruben Loftus-Cheek putting through his own net from a Solly March corner before Trevoh Chalobah slid Pervis Estupinan’s low cross past Kepa Arrizabalaga.

Kai Havertz nodded in Conor Gallagher’s exquisite cross to give the visitors hope two minutes after the interval, but a second-half Chelsea recovery failed to materialise.

Pascal Gross capped a miserable afternoon for Potter and his players with a close-range finish after Edouard Mendy – who had replaced the injured Arrizabalaga at half-time – parried Julio Enciso’s shot into the German’s path..

The victory lifts De Zerbi’s side up to seventh, while Chelsea stay fifth after suffering their first defeat after a run of nine unbeaten under Potter.

All eyes were on Potter as he took charge of his first game at Amex Stadium since Brighton’s 5-2 victory over Leicester in early September. The 52-year-old was booed by large sections of the home fans as he took his seat in the dugout, and his mood will not have been helped by his team’s defensive horror show on the south coast.

Silva nearly gifted the home side an opener when his attempted cross-field pass was cut out by Moises Caicedo, but the veteran centre-back atoned for his error with a superb goal-line clearance after Trossard had tried to chip Blues goalkeeper Arrizabalaga.

The Brazilian repeated the feat moments later to prevent Estupinan’s powerful strike from crossing the line, but it was his poor pass that allowed Kaoru Mitoma to set up Trossard for the game’s opening goal on five minutes.

The Seagulls’ second and third goals were also entirely self-inflicted from the visitors’ perspective. Loftus-Cheek stuck out a knee to inadvertently steer Gallagher’s flick-on into the net via the crossbar, before Estupinan’s delivery was guided past his own keeper by the somewhat unfortunate Chalobah.

Chelsea did have opportunities of their own – Christian Pulisic firing wide from a promising position and Robert Sanchez tipping Gallagher’s looping header past the post – but Havertz’s header early in the second half failed to spark a revival.

Havertz should have cut the deficit further but he blazed over the crossbar from inside the penalty area. And Gross finished off an incisive Brighton counter-attack late on to rub salt into Chelsea’s wounds.

Like his manager, former Brighton defender Marc Cucurella endured a miserable afternoon courtesy of Solly March, who was a constant menace down Chelsea’s left-hand side – particularly in the first half.

While Potter will take some solace from his team’s improvement in the second half, the damage was done before half-time.