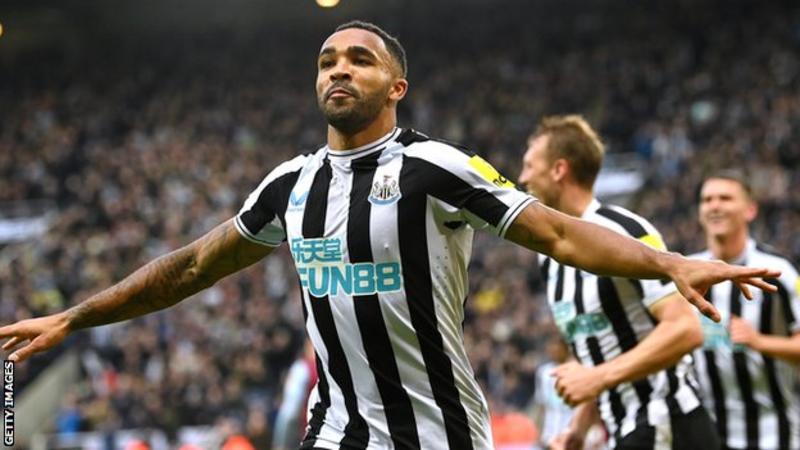 Wilson beat Villa’s substitute goalkeeper Robin Olsen from the spot after he replaced Emiliano Martinez, who was withdrawn after taking a blow to the head from team-mate Tyrone Mings.

The Newcastle striker doubled his side’s lead when he headed home from close range, with Joelinton and the in-form Almiron wrapping up a fifth win in six games for Eddie Howe’s side, who were denied a move up to third place in the table by Tottenham’s late winner at Bournemouth.

Another scintillating attacking display capped a superb month for Newcastle, who took 16 points from a possible 18 in October.

Playing a Premier League game while starting the day in the top four of the table for the first time since April 2012, Howe’s side underlined their status as contenders for a Champions League spot by stretching their unbeaten run to eight games.

While a stop-start first half did not aid Newcastle’s fluency, the hosts upped the tempo towards the end, with Wilson beating Olsen from 12 yards to open the scoring.

Wilson had a second goal ruled out for offside before the break, but he took his season’s tally to six when he nodded a Kieran Trippier cross in from close range.

Joelinton scored his first goal of the season, pouncing on the rebound after Olsen had denied Wilson his hat-trick and Almiron capped a fine Newcastle display, scoring for the third game running when he brilliantly curled a shot into the net.

Newcastle continued to push for goals but Wilson and substitute Jacob Murphy were denied by the woodwork as the hosts were made to settle for four.

Martinez kept on, then taken off after blow to the head 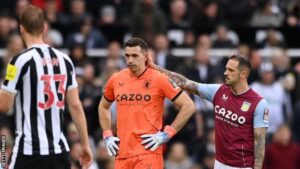 While Villa fans will be frustrated by their side’s inability to build on last week’s emphatic win over Brentford, there will be concerns over Martinez, who was withdrawn in the 35th minute.

There was a five-minute stoppage as Martinez received treatment with Mings having inadvertently struck the Argentine’s head with his knee after the goalkeeper had saved a Joelinton shot.

Having been assessed by Villa’s medical staff, Martinez remained on the pitch. However, after being called into action to collect a cross 10 minutes later, the former Arsenal stopper stayed down and put his hands to his head.

Following further assessment, a disconsolate Martinez was taken off with Olsen introduced for his first Villa appearance since the final day of last season.

It is one of a number of issues for new Villa boss Unai Emery to examine when he officially takes charge on Tuesday.