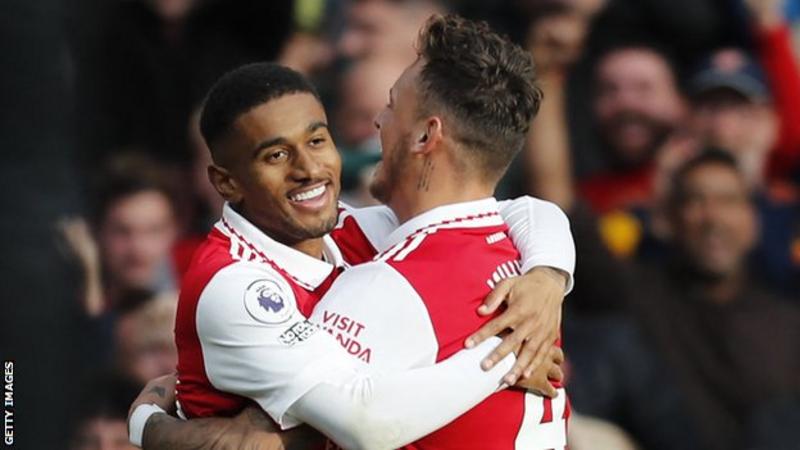 Arsenal bounced back from Thursday’s Europa League loss to PSV Eindhoven by returning to the top of the Premier League table with an emphatic win over Nottingham Forest.

Gabriel Martinelli headed the Gunners in front early on before England’s Bukayo Saka – who set up the opener – was forced off with an injury.

Reiss Nelson, Saka’s replacement, doubled the lead four minutes after the restart with his first Arsenal goal since November 2020 before quickly adding his second.

Thomas Partey and Martin Odegaard goals added gloss to the scoreline as Arsenal restored their two-point lead over Manchester City at the summit, with Forest still bottom after an eighth defeat of the season.

Saka was on the receiving end of Renan Lodi’s heavy challenge in the opening minute, and while he recovered to tee up Martinelli, the 21-year-old twice required treatment before being taken off in the 27th minute. 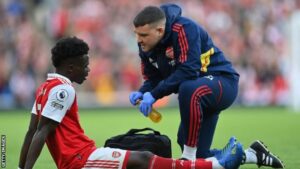 The sight of Saka heading straight down to the tunnel after being substituted will concern England fans just three weeks before the start of the World Cup, although Arsenal boss Mikel Arteta said the winger would “hopefully not” be in danger of missing the tournament.

While Saka looked bright before being withdrawn, Nelson seized an opportunity to shine on his first Premier League appearance since the opening match of last season.

The 22-year-old, who spent the 2021-22 campaign on loan at Feyenoord, put daylight between the teams when he fired home at the second attempt after Dean Henderson saved his initial shot.

Having had to wait almost two years for an Arsenal goal, Nelson scored his second in the space of three minutes when he poked a Gabriel Jesus cross into the far corner.

Nelson then turned provider, teeing up Partey, who lashed a superb right-footed shot into Henderson’s top corner before Odegaard hammered home a fifth to cap a dominant Arsenal display. 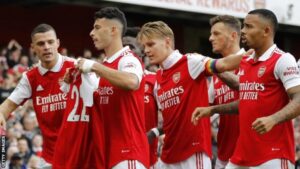