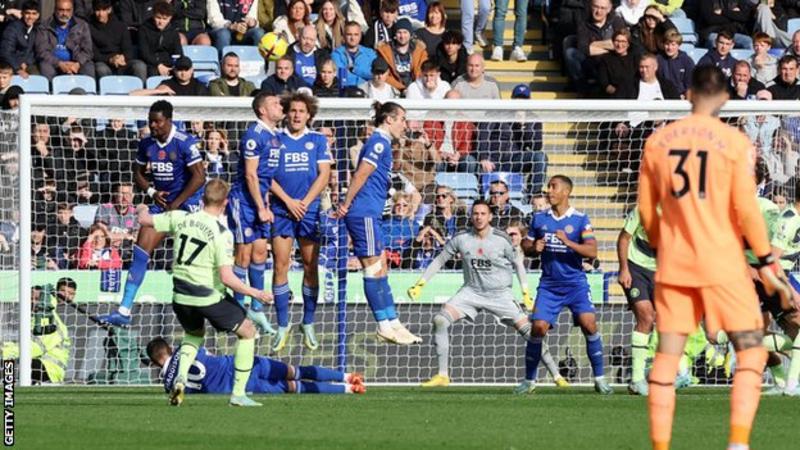 Foxes’ manager Brendan Rodgers had clearly set up his team to do a containing job on the reigning champions and it had worked effectively until De Bruyne curled a magnificent strike into the top corner from 25 yards four minutes after half-time.

De Bruyne’s goal was reward for City’s dominance, even though they missed the killer touch of the absent Erling Haaland, who has been suffering from a fever and a foot injury.

Leicester almost broke out of their defensive shell when Youri Tielemans struck a volley from a corner that was turned on to the bar by Manchester City keeper Ederson but ultimately they did not have enough attacking intent or quality to test Pep Guardiola’s side.

Arsenal can return to the top of the table with victory against Nottingham Forest at Emirates Stadium on Sunday but for now Manchester City are back in the position that has become such familiar territory in recent years.

The goals of Haaland have been the big storyline surrounding Manchester City’s season so far but the brilliant Norwegian was missing here having suffered from illness and injury that forced his departure at half-time against former club Borussia Dortmund in the Champions League in midweek.

It was a chance to see how Manchester City compensated for his absence and in the first half, when Leicester City simply sat back and let the champions attack with the occasional counter-attacking threat of their own, the sheer physical presence and air of menace presented by Haaland would have been a welcome addition to their attacking efforts.

And yet, even without Haaland, Manchester City demonstrated why they were the Premier League’s biggest force years before his spectacular entry on to the scene by conjuring up a spectacular moment from another area to win this difficult fixture.

It was De Bruyne, a rich seam of match-winning brilliance over the years, who delivered with a right-foot free-kick from 25 yards that was simply unstoppable, glancing off the frame of the goal, tantalisingly out of the reach of Leicester keeper Danny Ward.

Manchester City then held firm, despite the main anxious moment of Tielemans hitting the bar, with the celebrations at the final whistle demonstrating their delight at overcoming a Leicester team who had been showing improved form.