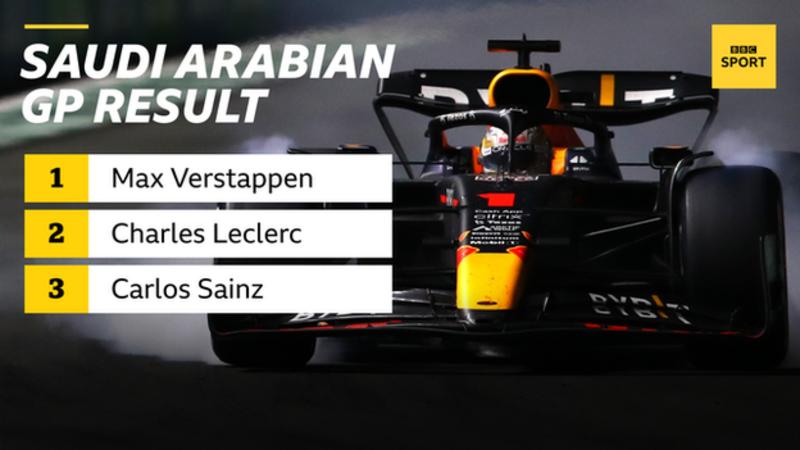 Max Verstappen won an intense race-long battle with Charles Leclerc to take his first victory of the season in the Saudi Arabian Grand Prix.

The Red Bull driver passed the Ferrari with four laps to go after the two had duelled during a tense race.

The battle occasionally bordered on farce as the two slowed down almost to a stop at times to try to work the DRS overtaking zones to their advantage.

But Verstappen edged it by 0.5 seconds after making the decisive move.

The two were in a league of their own out front as Ferrari’s Carlos Sainz and Red Bull’s Sergio Perez took third and fourth.

The excitement meant a difficult weekend for F1 ended on a high, but the drivers and other senior figures unnerved by Friday’s missile strike on a nearby oil depot are unlikely to allow the sport’s bosses to forget what has been an uncomfortable three days in the desert. 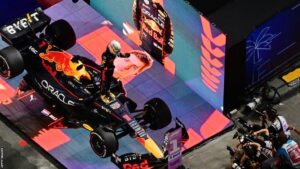 Just two races into the season, it already feels as if this year could distil, like last one, into a two-horse race, with Leclerc replacing Hamilton as Verstappen’s main rival.

Leclerc moved to the front after Ferrari appeared to trick Red Bull into making a pit stop with Perez, who started from pole and led the early laps.

A radio conversation asked Leclerc to “push to box” but he stayed out as Perez pitted. After the race, Leclerc said the team had agreed to do the opposite of Red Bull, who said their plan had always been to pit that lap. So Leclerc stayed out.

Ferrari’s plan was now to run longer and make ground with what they hoped was Leclerc’s extra pace.

But events came to Leclerc’s aid as Nicholas Latifi crashed his Williams and brought out the safety car on the next lap, gifting Leclerc, Verstappen and Sainz a ‘free’ stop and dropping Perez down to the fourth place he would retain to the end.

Leclerc nailed the restart and retained the lead. For lap after lap, Verstappen trailed him, at about 1.5-second distance, but Leclerc appeared to be able to hold him at bay.

But a virtual safety car period with 12 laps to go changed the race, as a result of a bizarre sequence of events as first Daniel Ricciardo’s McLaren and then Fernando Alonso’s Alpine ground to a halt in the entry to the pit lane.

On the restart, Verstappen was suddenly on Leclerc’s tail and the Ferrari driver could not shake him.

At first, Leclerc tried the same tactics that won him the first race of the season in Bahrain, letting Verstappen pass him at the end of one DRS overtaking zone – at the last corner in Jeddah – so he could have the boost from the DRS aid down the pit straight into Turn One.

That worked on lap 42 into lap 43, after which Leclerc set the fastest lap trying to break away from the Red Bull.

And the next time around, both slammed on the brakes into the last corner – Verstappen locking all four tyres – as they played chicken with the DRS trigger line.

But Verstappen came back at him. At the end of lap 45, Leclerc made an error into the last corner and lost a little time.

Then, on the following lap, they were again together into the final corner.

Verstappen rounded it on Leclerc’s tail, an oversteer snap slowed the Ferrari’s exit, and the DRS overtaking aid did the rest, Verstappen moving past down the straight with the final pass of the race.