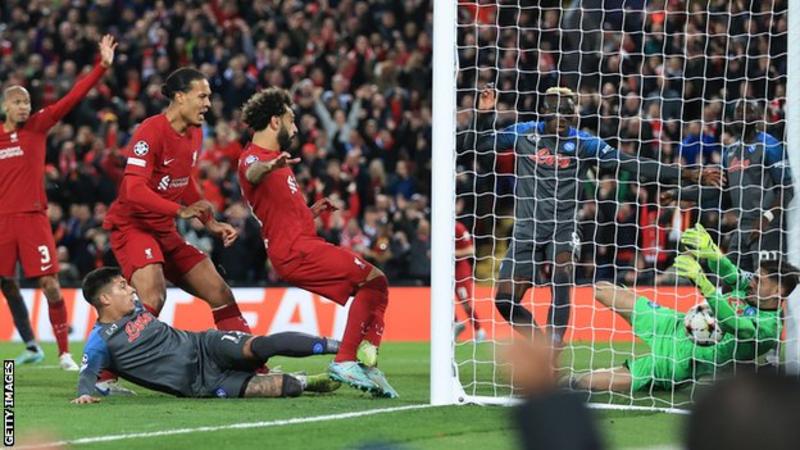 Liverpool ended Napoli’s flawless Champions League record with victory at Anfield but still had to settle for second place in Group A.

Jurgen Klopp’s side were looking to bounce back from Saturday’s home defeat by Leeds United and their spirits will be lifted by late goals from Mohamed Salah and Darwin Nunez which ended the impressive Serie A leaders’ unbeaten 21-game run.

Liverpool never looked remotely like securing the four-goal winning margin they would have needed against Napoli – who have exerted complete domination over the group – to finish top, but these three points will act as a real boost to morale.

Thiago Alcantara brought a save from Napoli keeper Alex Meret in the first half, while Napoli thought they had broken the deadlock after the break only for defender Leo Ostigard’s header from a free-kick to be ruled out for offside after a lengthy video assistant referee (VAR) examination.

A game of few chances looked to be heading for a draw but Liverpool snatched the win when Mohamed Salah forced home a close-range finish with five minutes to go, with Nunez sealing the deal in added time.

“I would have really enjoyed the game even without the goals,” Klopp told BT Sport.

“We showed tonight a reaction. Being compact makes all the difference. We have challenges in the right placed and are difficult to play against. You see what Napoli are able to do in the moment.

“It was a really good game for us. A lot of courage and bravery, going into challenges and making a fight of it. Two set-pieces bring us the points and 15 points in a Champions’ League group is insane.”

The vulnerability of Liverpool’s defence, not helped by a struggling midfield, has been one of the features of their disappointing start to the season but Ibrahima Konate showed what they have been missing as they confirmed a slot in the last 16 of the Champions League.

Konate suffered a pre-season knee injury that forced him to miss the start of the campaign, then he was sidelined again by a further muscle problem that saw Liverpool’s rearguard struggle badly without him.

The 23-year-old France defender returned against the formidable Napoli attack and gave an outstanding display as Liverpool looked a far more secure proposition than they have in recent times.

True, Napoli were not at their most destructive and knew it would take something truly special from Liverpool to turn this group on its head, but the class demonstrated by Konate illustrated exactly why manager Jurgen Klopp will hope this talented young defender can now have an injury-free run for the rest of the season.