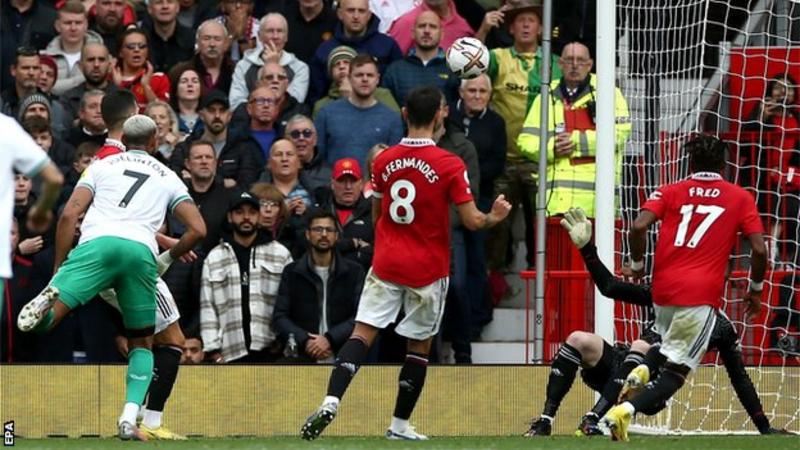 Marcus Rashford sent an injury-time header wide as Manchester United were held by Newcastle United and slipped three points off a top-four place.

With virtually the last touch of a disappointing game, Casemiro floated a cross to the far post. Substitute Rashford climbed highest but his effort went wide of the far post.

A goal at that point would have been harsh on Newcastle, who came close to securing only their second victory at Old Trafford since 1972 but after Joelinton’s first-half header had hit the bar, the Brazilian failed to head the rebound into an empty net.

The hosts’ frustrations were summed up by Cristiano Ronaldo.

The Portuguese striker, who had two second-half efforts disallowed, shook his head in irritation when he was replaced by Rashford 18 minutes from time.

He carried on chuntering to himself and shaking his head until he reached the dug-out, when he slumped down in simmering discontent.

The Scot did not experience defeat in this particular fixture throughout his 27-year reign as Manchester United manager. 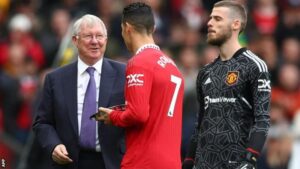 Including Ralf Rangnick, Ten Hag is the sixth man since Ferguson to be given the task of restoring the Old Trafford outfit to something like its former self.

The early weeks have been a switchback, brilliant against Liverpool and Arsenal, terrible against Brentford and Manchester City. There has been one constant, Christian Eriksen has proved to be an outstanding signing.

Sadly for Ten Hag, the Dane missed his first Premier League game of the season through illness and without him, Manchester United lacked creativity.

It was deep into the opening period before Antony forced Nick Pope into his first meaningful save and that came at the end of a Jadon Sancho-led counter-attack.

The home side did get the ball in the net twice in as many minutes after half-time but in both instances, Ronaldo’s effort was ruled out.

The first was clearly offside. The second was more debatable.

Ronaldo and his team-mates argued Fabian Schar had rolled a free-kick back to Pope and therefore the ball was in play. Pope did not move as Ronaldo closed in, suggesting he thought the kick was still to be taken.

Referee Craig Pawson sided with the England keeper, so Ronaldo nipping in to get the ball and tap into an empty net only brought him a yellow card.

Evidently Ten Hag was not impressed with Pawson’s performances judging by the way the Dutchman marched towards the official at the final whistle.