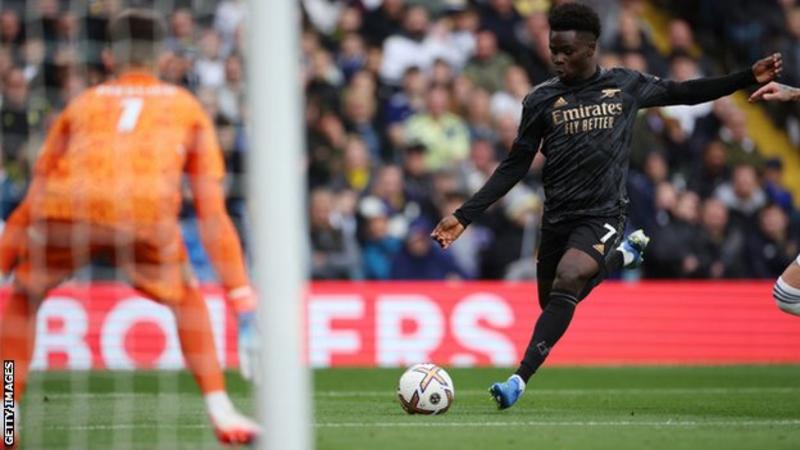 Premier League leaders Arsenal held on to win at Leeds in a dramatic finish after the match had been delayed by about 40 minutes because of a power outage.

There was drama in stoppage time when referee Chris Kavanagh sent off Arsenal’s Gabriel for kicking out at Leeds striker Patrick Bamford and awarded the hosts a penalty, but both decisions were overturned after Kavanagh reviewed the incident on the pitchside monitor.

Earlier, he halted the match after 23 seconds of play because of a power cut at Elland Road, which meant Kavanagh lost communication with the video assistant referee (VAR) officials, while goalline technology was down too.

Once they got going again, the impressive Bukayo Saka scored the winning goal in the first half by punishing Rodrigo’s loose pass, exchanging passes with Martin Odegaard before smashing in high at the near post.

Bamford was sent on at the start of the second half and the Englishman almost made an immediate impact but his close-range strike was ruled out for a push on Gabriel.

Before the stoppage-time controversy, Leeds were awarded a penalty when William Saliba was adjudged to have handled the ball, but Bamford dragged his effort wide.

Leeds piled on the pressure and Luis Sinisterra’s goal-bound shot was blocked by Gabriel, while Brenden Aaronson’s arrowed strike from long range was pushed away by Aaron Ramsdale.

Mikel Arteta’s side are now four points clear after making a highly impressive start to the campaign which has seen them collect nine victories from 10 Premier League games.

Bamford at centre of controversial contest

Arsenal’s only blemish this season has been a defeat at Manchester United and the Gunners showcased their mettle by somehow holding on for victory.

It wasn’t without controversy though and they rode their luck in the second half.

Bamford, who replaced Rodrigo, saw a couple of efforts saved by Ramsdale, as well as sending his penalty wide.

In stoppage time, it looked as though he would get the opportunity of a reprieve when Kavanagh showed Gabriel a red card for kicking out at Bamford, but after consultation with VAR decided the striker had pushed the defender first.

Leeds had plenty of chances with the lively Luis Sinisterra drilling wide and seeing a low shot tipped wide by Ramsdale. From the resulting corner, Pascal Struijk’s poked effort was clawed out by the Arsenal goalkeeper.

Ultimately, the home side could not find a breakthrough, increasing the pressure on boss Jesse Marsch as his side’s winless run extended to six games. 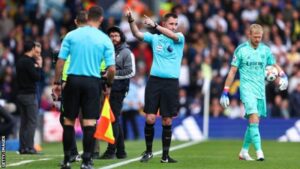 The earlier delay because of a power outage outside Elland Road meant referee Kavanagh could not communicate with VAR, which would play a crucial role when the match eventually resumed.

Kavanagh had to watch replays of both Saliba’s handball and the incident between Gabriel and Bamford at the end on the pitch side monitor before making his final decisions.

When the match was halted within the first minute, the players were left standing around and fans did not know what was happening.

An announcement was eventually made inside the stadium to say there had been a “power cut”, before Kavanagh led the two sets of players off the pitch after a wait of 12 minutes.

The players and officials returned to the pitch about 20 minutes later for a warm-up, before the 14:00 BST kick-off resumed at 14:40.