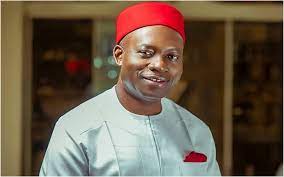 Professor CHUKWUMA SOLUDO has officially been sworn in as the sixth democratically-elected governor of Anambra state at a low-key ceremony at the State Government House, Awka, today.

The Former Central bank of Nigeria CBN governor took the Oath of office alongside his deputy Dr. ONYEKACHUKWU IBEZIM.

The newly sworn in governor in his speech promised to run the affairs of the state with no fear or favour, revamp the economy of the state and continue development of the state from where his predecessor stopped.

PROFFESOR SOLUDO who won the governorship election under the All Progressives Grand Alliance (APGA) is taking over from Ex-governor WILLY OBIANO after 8years in power.