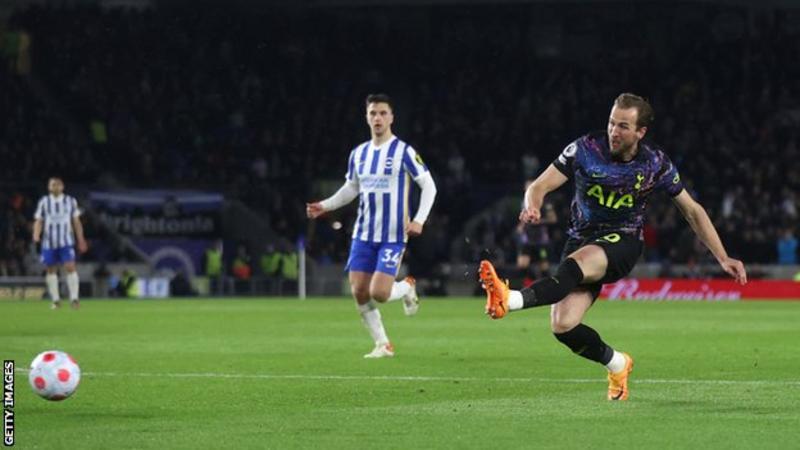 Tottenham manager Antonio Conte says Harry Kane “deserves to win something” after the forward scored and starred in their Premier League win at Brighton.

It also ensured the England forward has now scored more goals away from home (95) in the competition than any other player – and lifted him above Frank Lampard into fifth, with 178 goals, on the all-time list of Premier League scorers.

“I am happy for him because in every game he has many chances to score,” Conte said.

“At the start of the season he struggled a bit and didn’t score a lot and now he knows very well with this team he has great opportunities to score in every game.

“To have a striker like him makes us stronger but at the same time his feeling now is positive because he knows he will have chances. I think he deserves to win something in his career because we are talking about a fantastic player.”

The ease with which the Italian’s side won will concern Seagulls manager Graham Potter, whose side remain 13th having won just once in their last 10 matches.

By the time Kane had driven a low effort past Robert Sanchez, Tottenham were well in control. Cristian Romero had earlier put the visitors in front, deflecting in Dejan Kulusevski’s shot past the helpless Brighton goalkeeper, and into the bottom left corner.

The result sees Conte’s side move up to seventh in the table with 48 points three points adrift of fourth-placed Arsenal having played a game more.

However, they are only two points behind fifth-placed Manchester United, level on points with West Ham and have a game in hand on both before they host the Hammers on Sunday.

In the build-up to the game Conte had challenged his senior players to help deliver Champions League qualification and, in a show of faith, he named the same starting XI that began their defeat at Old Trafford.

Kane did not disappoint, putting a glaring early miss behind him to ensure a favourable outcome for his side.

Having charged down an attempted Sanchez clearance the 28-year-old could not contain his look of disappointment as he placed a side-footed effort wide of a vacant Brighton goal.

However, it was not to last for long and his influence grew throughout the match.

He repeatedly dropped into pockets of space in midfield, but also showed the nous to run beyond the Brighton backline as he raced onto Rodrigo Bentancur’s pass to drive a low effort past Sanchez just before the hour.

A Sanchez save prevented him from curling his second of the night into the top corner, while he also had a late penalty claim turned down.