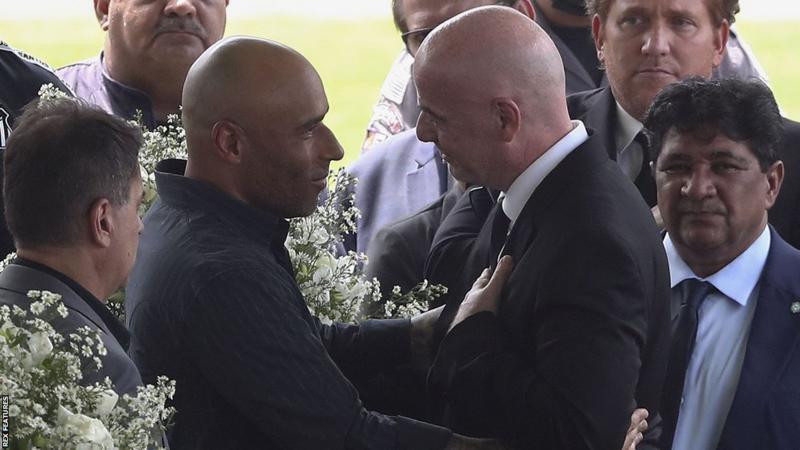 Thousands of mourners queued through the night to pay respects to Brazil legend Pele who is lying in state at the ground of his former club Santos.

Pele’s coffin was placed in the centre of the pitch at the Urbano Caldeira stadium in Sao Paulo, with fans lining the streets to get inside the ground.

The three-time World Cup winner died at the age of 82 on 29 December.

There will be a procession through the streets of Santos to a private family burial on Tuesday at 12:00 GMT.

“We’re going to ask every country in the world to name one of their football stadiums with the name of Pele,” said Fifa president Gianni Infantino, who attended the memorial.

New Brazilian president Luiz Inacio Lula da Silva will travel to Santos, a city in the state of Sao Paulo, to pay his respects as the 24-hour vigil draws to a close.

Pele, arguably the world’s greatest ever player, had been undergoing treatment for colon cancer since 2021.

‘There will be no one else like Pele’ – fans pay tribute

Thousands of fans gathered on the streets as the hearse arrived at the stadium on Monday morning, with some queuing overnight to see the coffin.

Beatrice woke up at six in the morning to travel with her husband from the city of Soracaba to Santos, and had been waiting for more than two hours in the queue. 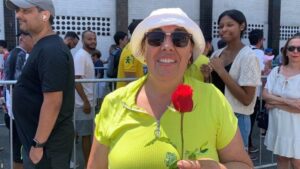 When asked what Pele meant to Brazilians aside from football, Beatrice said he had helped unite modern Brazil, breaking through racist standards in Brazilian society to open the world of football and wider society to black Brazilians.

The flag reads: “To the family Genio, your friend Pele”.

The Genio men had travelled overnight with the hearse carrying Pele’s body from Sao Paolo. “We followed him all the way. We’ve been here since 3.30am,” they said. 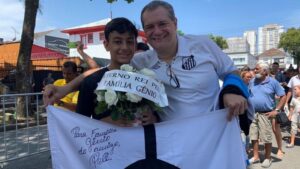 ‘The whole city is drawn to the stadium’

It is baking hot- about 30 degrees in Santos, but it feels like the whole city is drawn to the heart of Vila Belmiro stadium where Pele’s coffin lies.

A steady stream of mourners pass through the centre to pay their final respects – sometimes a smattering of applause breaks out as they pass his coffin. People from all over Brazil – and the outside world – have come. I spot a Mexican flag, a Dutch pin.

There are several news helicopters buzzing overhead. People are dressed in the striped black-and-white jerseys of the Santos Football Club – Pele’s team – or in Brazilian national team yellow jersey.

Pele’s voice blasts over the stands in the stadium – his 2006 song “Meu Legado”, meaning My Legacy, is playing on repeat.

Outside the stadium, a queue of thousands snakes for kilometres across half a dozen city blocks. It is a two-hour wait in the midday sun.

Men have taken off their shirts to wrap around their heads like bandanas. Others are fanning themselves with the tribute newspaper printed just for the day. Some have come prepared with hats, umbrellas and their tributes.

Sometimes a Mexican wave ripples through. There are occasional chants of Pele! Rei! But mostly, the crowds are patient in the heat, waiting for their turn to say goodbye. 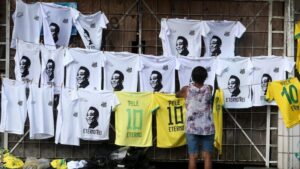 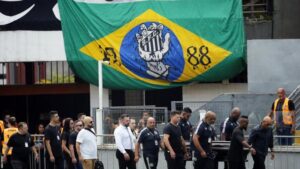 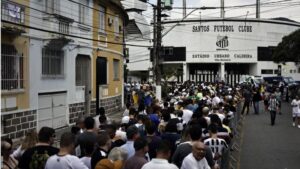 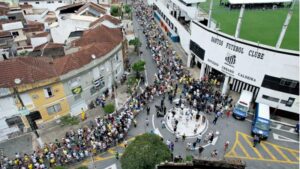