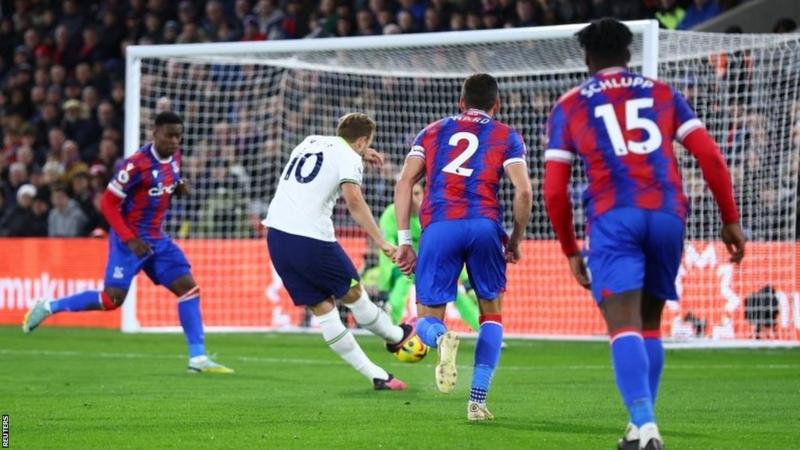 Kane’s towering close-range header from Ivan Perisic’s cross was the first time Spurs had led 1-0 in a game since 15 October. They had conceded the first goal in all 10 games in between.

He then drilled a low second into the bottom corner from Bryan Gil’s pass.

The England captain has now scored 264 goals for Spurs, only two behind Jimmy Greaves’ club record.

Kane, making his 300th Premier League appearance, had a hand in their next two goals too. First he found Son Heung-min, who picked out Matt Doherty to slot home.

And then he set Son away with a long ball forward with the South Korean smashing home, via a deflection, to end a 12-game scoreless run for club and country.

A satisfying score in the end after a very sloppy first half.

Had Palace taken one of their chances before the break, with Hugo Lloris denying Jordan Ayew well, it could have been so different.

In a crazy world, it is nice to have something or someone to rely on. For Spurs, that steady source of comfort is Kane.

Headlines before the game were again around manager Antonio Conte and his latest quotes about wanting more investment in his team and casting doubt over his long-term future.

Kane, like the entire Spurs team, were below their best in the first half. But in the second half he came to life.

As he leapt above two defenders to power in a header at the far post, it marked the 11th consecutive calendar year in which Kane has scored for Spurs.

His second was his 198th Premier League goal in 300 games.

Then it was the turn of others to score, with Doherty netting his first goal of the season.

With Dejan Kulusevski still injured – and Conte does not know when he will return – Son’s return to the scoresheet is timely.

This was only the second Premier League game that the South Korean, who shared the Golden Boot last season, has scored in all season.

Incidentally that goal made him the fourth player to score on their 200th Premier League start for Spurs after Teddy Sheringham, Kane and Aaron Lennon.