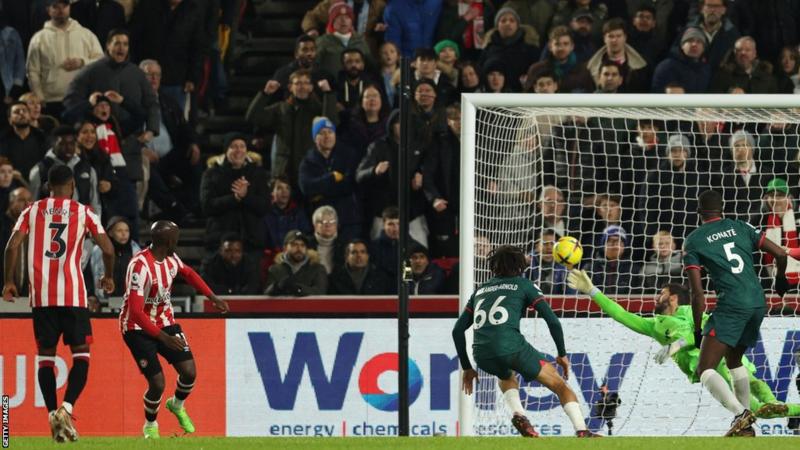 Liverpool’s performance in defeat by Brentford was “not good enough”, says Andrew Robertson, after a string of defensive mistakes meant the Reds missed the chance to close in on the Premier League’s top four.

The Reds shipped three poor goals at the Community Stadium as Brentford ran out deserved winners.

In a desperate first half, Ibrahima Konate scored an own goal at a corner and, having escaped conceding two further goals at set-pieces because of offside decisions on video review, Liverpool fell two behind when a mistake from Harvey Elliott allowed Mathias Jensen to set up Yoane Wissa.

Reds boss Jurgen Klopp made a triple substitution at half-time and Alex Oxlade-Chamberlain reduced the deficit but another error late on, this time from Konate, let Bryan Mbeumo in to seal the win.

The Reds, who would have gone within a point of fourth with a win, have now dropped 23 points this season – one more than in the entire campaign last season.

“With the fans sitting at home or on the bus back up to Liverpool, it’s not good enough for them,” defender Robertson said.

“We’ve spoken about consistency and things like that but we’re not getting it.

“It feels like we’re one step forward and one step back at the moment which makes it hard to climb the league table unfortunately.”

Brentford, meanwhile, are unbeaten in six games – their best run in the top flight for more than 80 years – and climb to seventh.

Liverpool’s defending was reminiscent of last week’s showing against Leicester when Klopp’s side ran out 2-1 winners, but were cut open on a number of occasions.

Konate was unfortunate with the first goal which flicked his calf, but that corner came from Mbeumo running clean through on the counter-attack and goalkeeper Alisson having to bail out the defence.

The disorganised visitors were all at sea at the two subsequent corners, fortunately surviving on both occasions as Wissa turned the ball home but his effort was ruled out as it struck an offside Ben Mee on the way in.

With the hosts fired up, the Reds made one mistake too many seconds later when Elliott lost the ball attempting a dummy in his own half from the restart.

They improved after the break, Virgil van Dijk one of those replaced with a hamstring injury, but in the 84th minute Konate should have been stronger when he was brushed off the ball by Mbeumo.