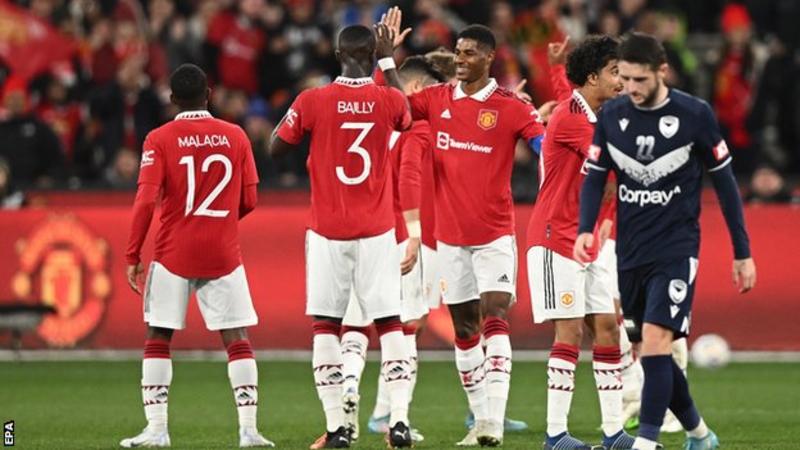 Manchester United came from behind to beat A League outfit Melbourne Victory 4-1 as they maintained their 100% start to pre-season.

Two goals in as many minutes from Scott McTominay and Anthony Martial at the end of the opening period turned the match around after Chris Ikonomidis’ early effort had given Victory a shock lead.

As he did against Liverpool on Tuesday, United manager Erik ten Hag made 10 changes at the interval and Marcus Rashford added a third when he ran on to Eric Bailly’s through ball.

Their comeback was completed when Tahith Chong’s low cross was turned into his own net by Victory youngster Edmond Lupancu.

New manager Ten Hag’s preferences are starting to show themselves as pre-season progresses.

Jadon Sancho played on the right of the attack in the first-half and Rashford on the left after the break.

Skipper Harry Maguire also started as the right centre-back, which is perhaps significant as Lisandro Martinez, the Argentina defender United are close to signing from Ajax, plays on the left.

England defender Maguire lacked the speed to match Ikonomidis as Melbourne took the lead when he finished a low cross after Victor Lindelof had to pull out wide to challenge Ben Folami with Luke Shaw out of position.

The noisy home fans behind the goal responded with a cheeky ‘Getting sacked in the morning’ chant.

Ten Hag looked stern and displeased as he stood on his own on the touchline watching his new charges struggle to break down a side at the beginning of their own pre-season preparations who were prepared to sit deep.

McTominay then enjoyed two bits of luck that led to his equaliser and once Martial had put them in front, United were never seriously threatened.

The Norwegian did not survive as United boss long enough to see if Sancho would be worth the £73m investment United eventually made in the England winger.

After a patchy debut campaign, more is expected this time around and while it is too early for snap judgements, the early signs are positive.

The former Borussia Dortmund’s quick feet and excellent balance had the home defence in trouble and his combination with Diogo Dalot was the most effective in the United side.

It was Sancho’s through ball that set up Bruno Fernandes for United’s first chance, which Izzo saved, and the 22-year-old provided the pass that set Dalot away to deliver the cross Anthony Elanga touched on to Martial to put them in front.

Ten Hag spoke in the build-up to this game about the need for more penetration from the right-hand side.

If Sancho can build on his first two pre-season appearances, he might solve that issue for Ten Hag.