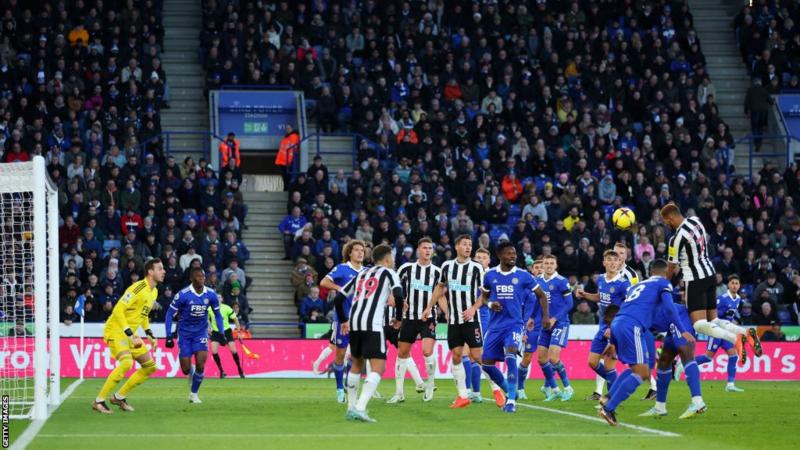 Newcastle United cruised past Leicester City with three first-half goals to claim a sixth consecutive Premier League win and move up to second in the table.

Chris Wood kickstarted a dominant performance by smashing the opener from the penalty spot before Miguel Almiron glided past the Leicester defence to tuck away the second.

Joelinton headed the third from a Kieran Trippier corner for his second goal of the season as the Magpies demonstrated the clinical edge that the hosts were missing.

With England midfielder James Maddison out of the Leicester squad, as he continues to recover from a knee issue sustained before the World Cup, Brendan Rodgers’ side were toothless in attack.

Jamie Vardy was introduced off the bench to add pace to the Foxes’ attack in the second half, and he managed to get in down the side on a couple of occasions but there was no blue shirt to meet his crosses.

The Magpies are four points behind leaders Arsenal, who have played two fewer games. Leicester – who registered just two tame efforts on target in the final 10 minutes – remain 13th.

Magpies pick up where they left off as Foxes struggle

Newcastle were the form team in the Premier League before the World Cup break, having recorded successive wins over Everton, Tottenham, Aston Villa, Southampton and Chelsea.

England forward Callum Wilson was missing from the matchday squad because of illness, but the match could not have started better for the visitors as Joelinton was brought down inside the area by a swipe of Daniel Amartey’s leg with only a minute on the clock.

Wood drilled the ball down the middle to beat goalkeeper Danny Ward and open the scoring.

Leicester’s defence lacked an intensity in the absence of the experienced Jonny Evans, and Almiron was the beneficiary for the second as he glided past the blue shirts to open up his body and find the far corner with a finish he practised so diligently in the warm-up.

The game was over as a contest before the interval when Joelinton was rewarded for his endeavour with a powerful headed goal as he completely lost marker Youri Tielemans.

The hosts will be hoping for playmaker Maddison to return from his knee injury quickly as they seek to move up the table in the weeks ahead.

But if Newcastle can keep up this run of form, they might just have cause to dream of a new year title push.