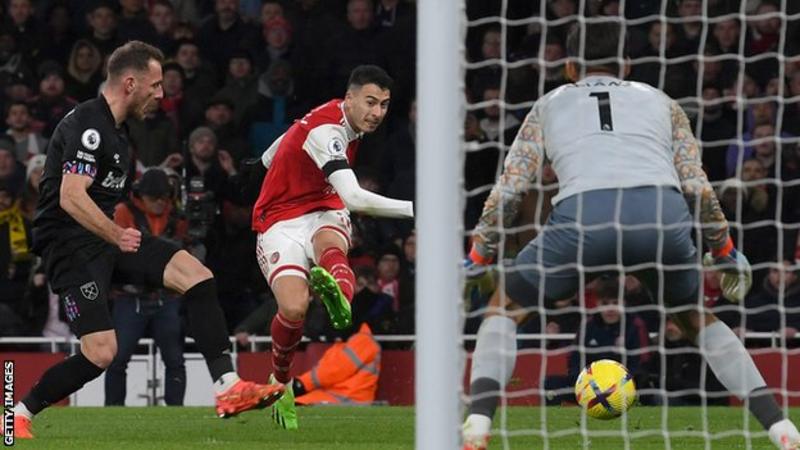 Arsenal underlined their title credentials by producing a second-half fightback to beat West Ham and move seven points clear at the top as the Premier League returned after the World Cup.

West Ham took the lead against the run of play when Jarrod Bowen was judged to have been clipped in the box by William Saliba, allowing Said Benrahma to smash a confident penalty down the middle.

There was a mood of frustration among the home fans until Bukayo Saka converted from close range after collecting Martin Odegaard’s mis-hit shot.

The equaliser gave increased impetus to the Gunners and another home goal looked increasingly likely.

Five minutes later, it duly arrived. Gabriel Martinelli put the hosts ahead, catching out West Ham’s former Gunners keeper Lukasz Fabianski by tucking inside the near post from a tight angle when he looked more likely to cross.

The points were sealed when Eddie Nketiah – starting in place of the injured Gabriel Jesus – spun sharply in the box before firing into the opposite bottom corner.

Arsenal extended their lead at the top over Newcastle, who moved second by beating Leicester earlier on Monday.

Reigning champions Manchester City – who go to Leeds United on Wednesday – are now eight points behind the Gunners.

West Ham are 16th and just a point above the relegation zone after their fourth league defeat in a row.

Arsenal fans are starting to believe their side can genuinely maintain their push for the club’s first title since Arsene Wenger’s Invincibles in 2004.

And on a night where legendary manager Wenger watched from the Emirates Stadium stands for the first time since leaving in 2018, Arteta’s young side added further encouragement to those who are dreaming of a long-awaited triumph.

The match came on the third anniversary of Arteta’s first game as Arsenal manager, and significant progress has been made since then.

When the former Gunners midfielder took over, they were closer to the relegation zone than the top four.

Their current position – and mood around the club – is a stark measure of how they have come.

The Spaniard has built a new team in the past three years which bears little resemblance – in style and substance – to the one picked for his first game at Bournemouth in 2019.

Arteta will not be getting carried after this win over West Ham, especially with several significant fixtures – not least against Manchester City – on the horizon.

But the Gunners sent a message with a clinical second-half performance and the omens are also in their favour.

The team who topped the Premier League table on Christmas Day have gone on to be champions in 10 of the past 13 seasons.