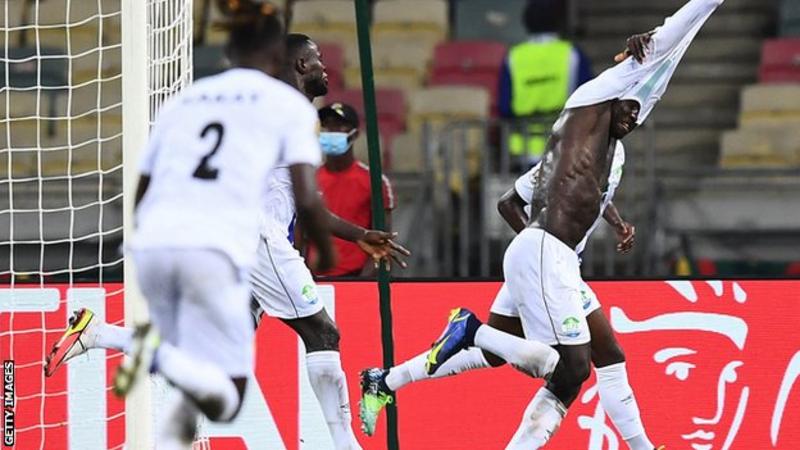 Sierra Leone scored a dramatic injury-time equaliser to grab a 2-2 draw against Ivory Coast at the Africa Cup of Nations in Douala.

The Elephants had been coasting but an astonishing mistake from Badra Sangare allowed Alhadji Kamara to tap in.

Keeper Sangare fumbled a back-header and could only watch helplessly as Kamara secured a second successive draw for the Leone Stars in Group E.

It means they have every hope of going through to the last 16.

Sierra Leone have two points from two games, while the Ivorians top the group with four points to their name.

However, the Elephants still have work to do when they face defending champions Algeria on Thursday (16:00 GMT).

Both sides played their part in an enthralling match, which saw Ivory Coast miss an early penalty but then lead twice before Sierra Leone hit back in dramatic fashion.

The Ivorians should have already been in front in the 12th minute after Wilfried Zaha was brought down in the box by Sierra Leone captain Umaru Bangura’s clumsy challenge.

But keeper Mohamed Nbalie Kamara, who was man of the match in the Leone Stars’ opening game against Algeria, produced another great save to deny AC Milan’s Franck Kessie’s from the spot.

The Elephants did take lead in the 25th minute when Wilfried Zaha’s outstanding pass found Sebastien Haller as the Sierra Leone defence back-pedalled and the Ajax man ran on and fired home for his first goal at a Nations Cup finals.

Sierra Leone were never outclassed in this game and got the reward they deserved early in the second half thanks to a magnificent left-footed strike from Musa Noah Kamara which brought them level with 55 minutes on the clock.

The Elephants wasted several clear-cut chances to wrap up the points, with substitute Hamad Traore particularly wasteful, and Nbalie Kamara pulled off off a couple more outstanding saves.

That always left open the chance that the Ivory Coast could be punished, and so it proved seven minutes into stoppage time when the Leone Stars pushed forward one last time, Sangare made his mistake and Kamara and Sierra Leone profited.

The keeper went off injured after that and the Elephants finished an amazing game with right-back Serge Aurier in goal, who had work to do as Sierra Leone pushed for a winner.

Sierra Leone’s final group game is against Equatorial Guinea in Limbe on Thursday and their confidence will be sky high after another impressive result and performance against another of Africa’s heavyweights.