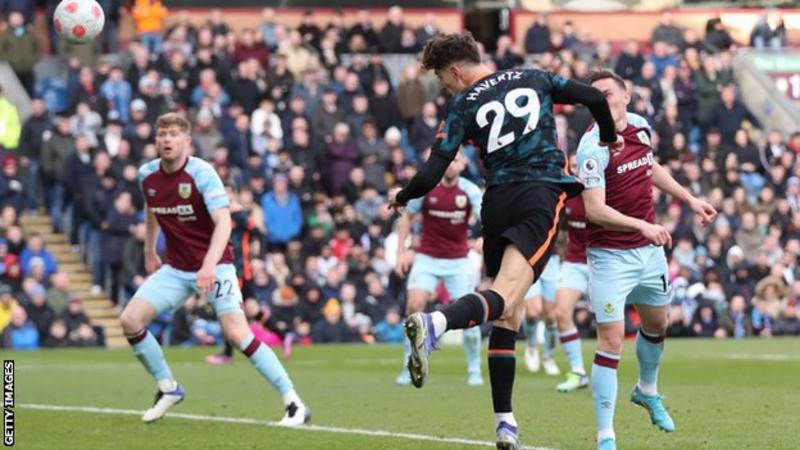 Four goals in 22 second-half minutes helped Chelsea cruise to victory in their first Premier League game since owner Roman Abramovich said he will sell the club.

Manager Thomas Tuchel admitted news of the Russian billionaire’s decision had been a distraction, but his side did not show it at Turf Moor thanks to two goals from Kai Havertz, sandwiched between Reece James’ opener and Christian Pulisic’s close-range finish.

Burnley will rue missed opportunities when the scores were level as they fell to a second successive defeat to remain in the relegation zone.

Just after the half-hour mark, the hosts squandered a great chance. Ashley Westwood’s looped cross was misjudged by Chelsea keeper Edouard Mendy, who only punched as far as Dwight McNeil. Somehow, with the goal gaping, he managed to shoot over the bar.

Chelsea had plenty of possession in the first half, but little cutting edge; Nick Pope was barely tested in the Burnley goal.

Almost immediately after the restart, though, James edged into a crowded area and kept his cool to fire emphatically across Pope.

Chelsea were soon three up and in total control. First, Pulisic’s pinpoint cross was guided home expertly by Havertz, before the German bundled James’ cross over the line.

Pulisic got in on the act 21 minutes from time, rounding off what turned out to be a comfortable afternoon for Chelsea.

Following Russia’s invasion of Ukraine, Abramovich has made it clear he is looking for offers for the club, but the travelling support gave him their backing by chanting his name throughout the afternoon.

The Burnley fans responded with jeers on every occasion after both sides took part in a minute’s applause in solidarity with Ukraine at kick-off.

On the pitch Chelsea took their time asserting themselves but blew Burnley away from the moment the second half whistle blew.

After starting – and scoring – in the FA Cup victory at Luton on Wednesday, Romelu Lukaku returned to the bench as Havertz took centre stage again.

James’ impact on the right could not be understated, given he helped open the game up with the first goal.