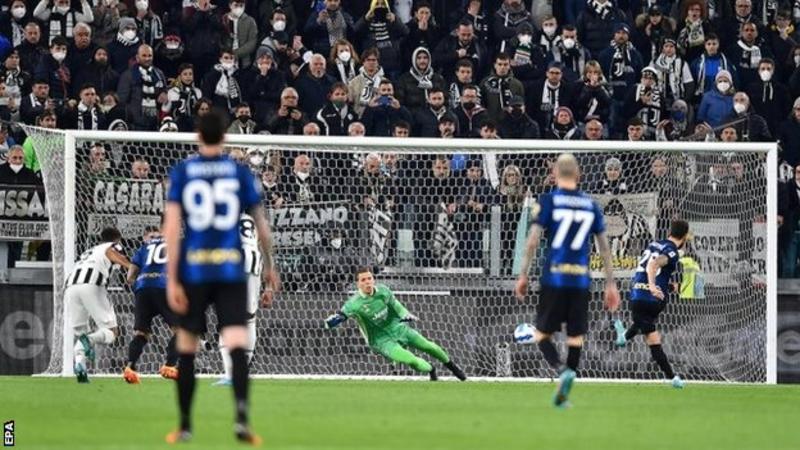 Hakan Calhanoglu’s disputed penalty gave Inter Milan victory at Juventus and boosted their Serie A title hopes, while all but ending Juve’s chances.

Inter are three points behind Napoli, who won 3-1 at Atalanta on Sunday, and AC Milan, who host Bologna on Monday – with Juve four points further behind.

Calhanoglu’s initial penalty was saved by Wojciech Szczesny but the video assistant referee spotted encroachment by defender Matthijs de Ligt and Calhanoglu made no mistake with the second attempt.

The penalty itself had only been awarded after a VAR review on Alex Sandro’s foul on Denzel Dumfries. Juve were furious with both decisions.

The hosts hit the woodwork twice, Giorgio Chiellini striking the bar before the goal and Denis Zakaria crashing off the post in the second half.

The result went against the form books, with Juve having been unbeaten in the league since November and champions Inter only winning one of their previous seven.

Earlier on Sunday, Napoli moved level with Serie A leaders AC Milan on points with victory at Atalanta.

Lorenzo Insigne put them ahead with an early penalty and Matteo Politano doubled the lead with a volley.

Marten de Roon pulled one back but Eljif Elmas finished a late counter-attack to seal the win.

Henrikh Mkhitaryan scored the only goal.