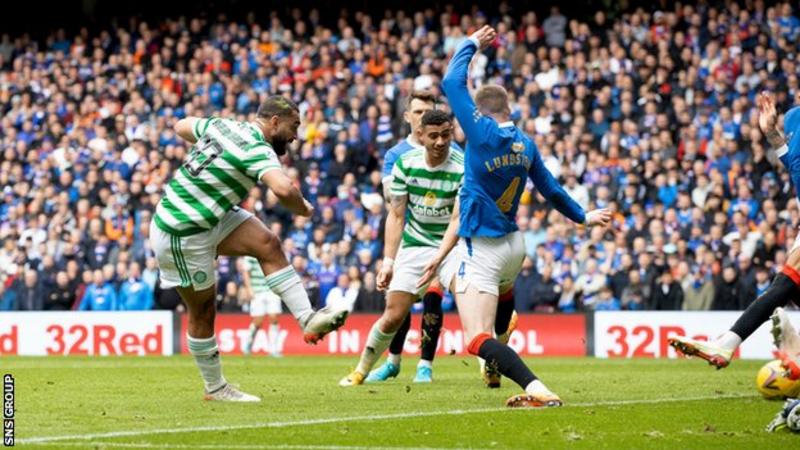 Celtic took a giant stride towards reclaiming the Scottish Premiership title after battling back to beat Rangers at Ibrox and move six points clear of their rivals.

Aaron Ramsey’s opener was cancelled out inside seven minutes by Tom Rogic’s close-range strike, before the leaders took control when Cameron Carter-Vickers forced home after a free-kick.

The second half was delayed to remove broken glass from the pitch but, when play eventually resumed, Rangers could not find a leveller.

Giovanni van Bronckhorst’s side tried to fight their way back as they faced a potentially knockout blow in their title defence, but were met with stiff resistance as Celtic clung to a vital victory, with Joe Hart only forced to make one key save.

Substitute Liel Abada also passed up two chances to seal it for the visitors, with Allan McGregor pulling off an incredible stop to deny the Israeli’s second attempt.

With a six-point lead and a 16-goal advantage with six games to play, Ange Postecoglou’s men are in a commanding position to win the league, even with one more derby to come at Celtic Park.

Furthermore, it marks a 12-point swing since the winter break, which Rangers themselves went into six points in front.

It marks Rangers’ first domestic home defeat in more than two years, and was secured in gritty fashion in the second half when Carter-Vickers and Carl Starfelt were outstanding in heading clear repeated crosses into their box.

With Alfredo Morelos absent with injury, Kemar Roofe started up front for Rangers but he fired wide both of his side’s best chance from inside the box.

Both sides also had penalty claims waved away in a match of relentless running, with players also struggling with cramp in the closing stages.

But it was Celtic who stood firm and claimed the vital three points, extending their unbeaten domestic run to 31 games. 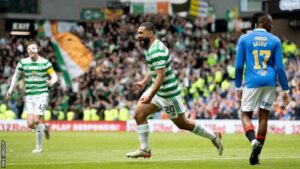