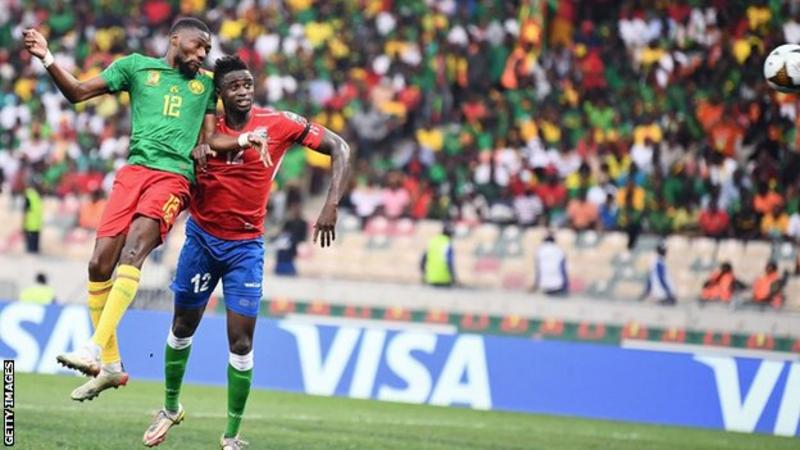 Karl Toko Ekambi scored two second-half goals as hosts Cameroon beat The Gambia to move into the semi-finals of the Africa Cup of Nations.

Toko Ekambi headed his country ahead in the 50th minute, glancing in from Collins Fai’s right-wing cross.

Cameroon will play either Egypt or Morocco in the semi-final on Thursday, with the final next Sunday.

The Gambia were competing in the tournament for the first time and beat Mauritania and Tunisia in the group phase to reach the knockout stages, before eliminating Guinea in the last 16.

But, in front of a passionate home crowd at Japoma Stadium in Douala, The Gambia were outclassed and could have fallen behind in the first half.

Fai fired into the side-netting from 30 yards before Vincent Aboubakar – the tournament’s leading goalscorer with six – glanced a header just wide, and was then denied from another close-range header as goalkeeper Baboucarr Gaye produced an excellent save.

However, The Gambia’s resistance was broken early in the second half as Toko Ekambi rose above defender James Gomez to head five-time Afcon winners Cameroon into the lead with his fourth goal of the tournament.

His fifth came shortly afterwards, when he got on the end of Hongla’s inviting cross.

The other semi-final will see the winners of Saturday’s second match, Burkina Faso, play either Senegal or Equatorial Guinea – with that quarter-final tie live on BBC Two from 18:45 GMT on Sunday. Both semi-finals and the final will also be live on the BBC.

Cameroon were playing for the first time since eight supporters, including an eight-year-old boy, lost their lives in a crush outside Olembe stadium in Yaounde on Monday before the last-16 win over Comoros.