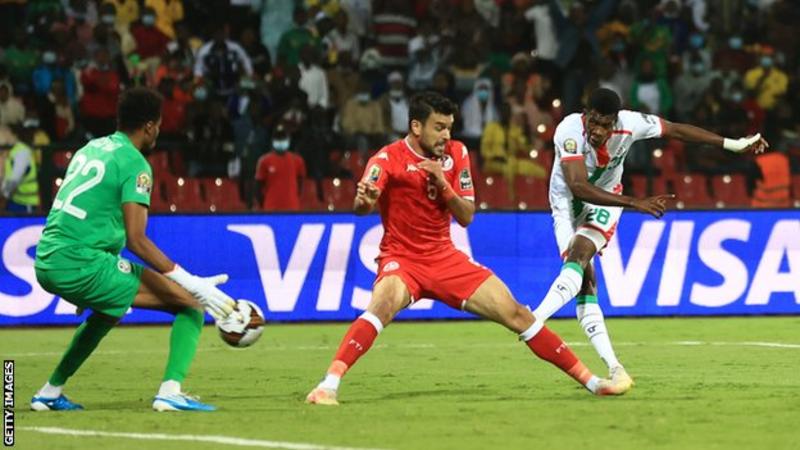 Teenager Dango Ouattara scored the only goal and was sent off as Burkina Faso surprised Tunisia to reach the Africa Cup of Nations semi-finals.

Ouattara, 19, ran onto Blati Toure’s through ball, held off two defenders and cut inside before firing in.

But he was then sent off in the 82nd minute for an elbow on Ali Maaloul.

The Stallions, who have never won the tournament, will meet the winner of Sunday’s BBC Two game between Senegal and Equatorial Guinea (19:00 GMT).

But they will be without Ouattara, now suspended after his late dismissal. It came after referee Joshua Bondo’s second trip to the monitor for a video assistant referee check in quick succession.

Minutes earlier, Tunisia were denied a penalty as Soumaila Ouattara caught Wahbi Khazri with a high tackle in the box after initially winning the ball.

Burkina Faso, who are ranked 60th in the world, have won all four Afcon quarters they have ever played including three in the past four tournaments. Tunisia, ranked 30th, have lost six of their past seven.

Kamou Malo’s side were hanging on at the end but the Eagles of Carthage, who beat Nigeria in the last 16, never really looked like equalising.

Khazri had two of their better chances, with a 30-yard free-kick tipped over the bar by Herve Koffi and a miscued shot from six yards going well wide.

Lorient forward Ouattara was the difference between the teams with his run from Toure’s midfield ball before lashing in just before the half-time whistle – although his late red card could well end his tournament.

The Burkinabe, who lost the 2013 final, had chances to win by more – albeit long before the late drama – with Cyrille Bayala denied by Bechir Ben Said when he had time and space in the box.

The final whistle, blown 15 seconds before the indicated amount of injury time was over, was met by wild celebrations from the Burkina Faso players.