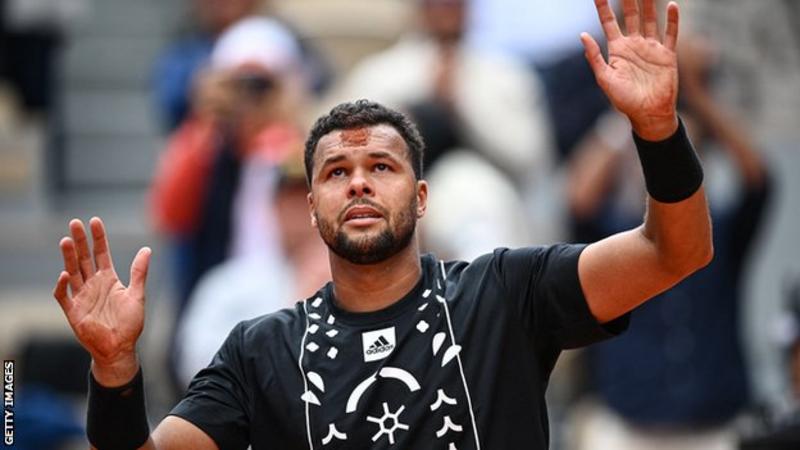 Jo-Wilfried Tsonga was never going to retire quietly at his home Grand Slam.

Contesting the final tournament of his 18-year professional career, the two-time semi-finalist treated his supporters to one final rollercoaster against Norway’s world number eight Casper Ruud at the French Open.

He had tears in his eyes when tossing the ball for what he must have known would be his final serve and after a moment where he seemed to let it all sink in, he dropped to his knees and bowed his head into the clay.

Ruud took little joy in wrapping up the victory in the manner he was forced to, embracing his opponent at the net before paying tribute to a player he described as an “inspiration” in his post-match interview.

A ceremony was held on the main show court, with friends, family and fellow players joining Tsonga as a video featuring his career highlights and messages from Andy Murray, Novak Djokovic, Rafael Nadal and Roger Federer, was played.

“Today is a big day. A day that I say goodbye. I’d like to thank everyone that has come with me on this adventure,” Tsonga said.

“I had the luck and the opportunity to do all of this. It’s been amazing to be part of a wonderful generation of French players.” 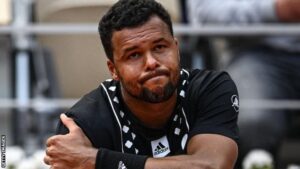 The 37-year-old has been plagued by injury in recent years, missing almost the entire 2020 season with a back problem, and last won a match in February.

It led to the former world number five admitting “both my mind and my body have told me that it’s time to stop”.

But, roared on by a partisan crowd, Tsonga – who reached the final four at Roland Garros in 2013 and 2015 – looked set to prolong his career at least a little while longer as he broke serve to lead 6-5 in the fourth set, and bring a tantalising decider into view.

The court erupted and the crowd rose to their feet for a rendition of La Marseillaise as the Frenchman signalled he was not quite done.

But, beginning his task of serving out the fourth, the Frenchman winced in pain and clutched his right shoulder. The 12th game quickly unravelled before a medical timeout could be called, the crowd fearing the worst.

Tsonga returned to the court for the crucial tie-break, but ultimately he could not shake off the injury. Resorting to switching his racquet to his left hand mid-point, an emotional end to the 2008 Australian Open runner-up’s career reached its inevitable conclusion.

“I wanted to show resilience from a young age,” Tsonga added.

“I’ve had fabulous days and some that have not been so good. I’m now standing in front of you without my racquet, along with my best friends of 30 years.

“My family are now my priority. Thank you tennis. I love you.”