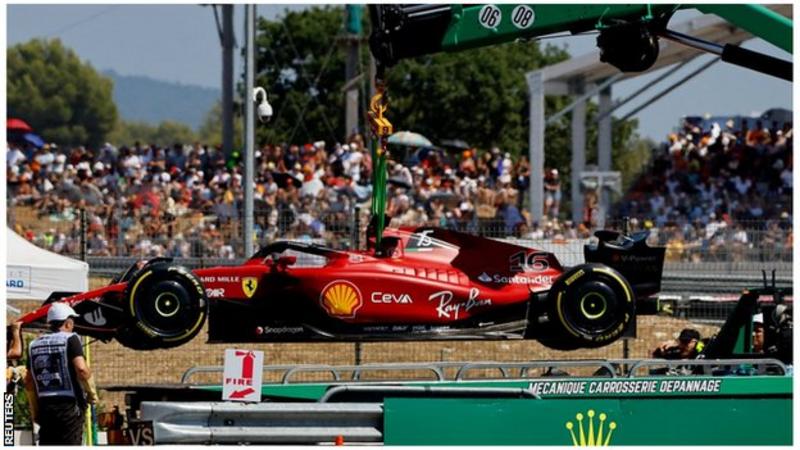 Charles Leclerc gifted Max Verstappen victory and a huge advantage in the World Championship by crashing out of the lead of the French Grand Prix.

The Ferrari driver, in need of a good result to keep his title hopes alive, lost control at the Beausset right-hander two laps after the Red Bull had made its first pit stop.

Verstappen’s seventh win in 12 races gives him a 63-point lead with 10 races to go.

Lewis Hamilton took a strong second, and his Mercedes team-mate George Russell third and the final podium place after a frantic and bad-tempered fight with Red Bull’s Sergio Perez in the closing laps.

Ferrari’s Carlos Sainz was fifth, questioning his team’s decision to make a second pit stop just after he had taken third place from Perez with 11 laps to go.

“The car was quick today – of course, unlucky for Charles, I hope he is OK – but I just did my race and looked after the tyres,” said Verstappen.

“We still have a bit of work to do, over a single lap especially, so we just have to keep on working.” 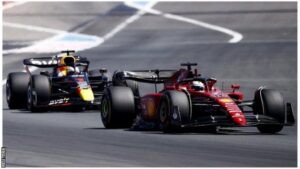 Leclerc’s catastrophic error rendered redundant questions as to who would prevail in what had until then been a finely-poised race between him and Verstappen.

Leclerc, who started from pole position, held on to the lead on the first lap and had to weather heavy pressure from Verstappen for the first 10 laps.

But after that, Leclerc managed to extend his advantage to more than a second, preventing Verstappen from using the DRS overtaking aid, to make his lead a little more comfortable.

Leclerc stayed out and the question was how long he would run before his stop, and whether he would be able to regain the lead from Verstappen after he pitted.

But less than two laps later, none of that mattered, when the Ferrari looped into a spin at the demanding double-right corner after the long Mistral straight and the flat-out Signes curve.

Leclerc spun across the run-off area before nosing into the barriers, relatively lightly given the speed at which he lost control.

He tried to reverse out but couldn’t, saying over the radio: “I can’t go on the throttle.”

Shortly after, well aware of the consequences of his error, he let out an anguished: “No!”

After returning to the paddock, Leclerc said: “Just not good enough. I am performing at a very high level since the beginning of the season but if I keep making these mistakes it is pointless to be performing at this high level, I will try to get better but this is not good.”

It was the continuation of an extraordinary run for Leclerc, who led Verstappen by 46 points after three races at the start of the season.

Until now, the errors have nearly all been from Ferrari – two engine failures and two strategy errors while leading – but now Leclerc has made a big one, to add to the small mistake that turned third place into sixth at the Emilia Romagna Grand Prix back in April. 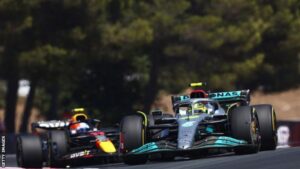