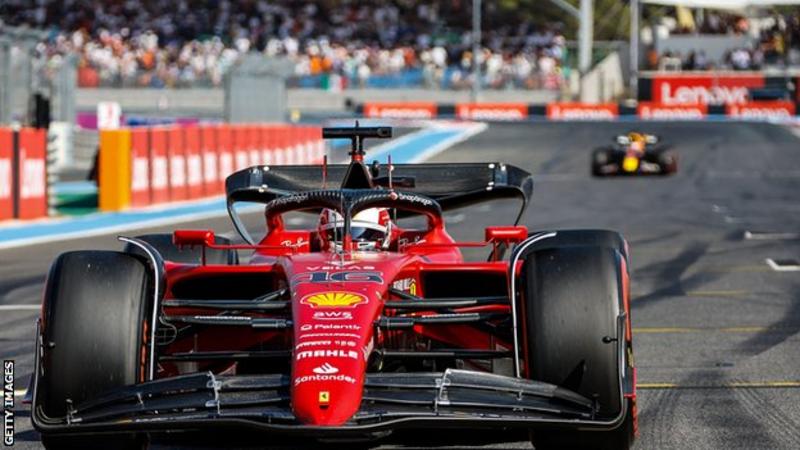 Leclerc beat Verstappen by 0.304 seconds after Sainz, who has a grid penalty, gave him a slipstream on both laps in the final session.

Ferrari nailed the slipstream tactics on the second attempt after Leclerc was only 0.008secs ahead initially.

Alpine’s Fernando Alonso headed the midfield runners in seventh, with Alpha Tauri’s Yuki Tsunoda, Sainz and Haas’ Kevin Magnussen, who starts from the back like Sainz, completing the top 10.

Ferrari took advantage of the fact that Sainz will start from the back of the grid because of a series of penalties for excessive engine usage to deploy him to assist Leclerc in the bid for pole.

At the first attempt, the slipstream tactic did not work that well, Leclerc and Sainz not quite getting their co-ordination right.

But on the second runs Leclerc picked up Sainz’s tow exiting the chicane that splits the long Mistral straight and had the slipstream all the way down through the flat-out Signes corner before Sainz moved out of the way into the Beausset double-left.

It allowed Leclerc to be more than 0.2secs quicker through the middle sector – Ferrari’s weakest part of the track – than on his previous lap, and the car’s pace in the corners of the final sector stretched him further ahead.

Leclerc said he was “surprised” Ferrari were so quick as Red Bull had appeared to have an advantage in practice.

“It was a great lap,” he said, as he celebrated his seventh pole in 12 races this year. “I struggled all weekend to put a lap together and I managed to put it. But I must say thanks to Carlos because it would have been much closer without him.”

However, Red Bull looks ominous going into the race, because of the car’s obvious advantage on the straights.

Verstappen said: “Overall we were lacking a bit in qualifying, just general grip. It was a bit trickier than I would have hoped but we still have a decent race car.

“Tomorrow will come to our favour. We are quick on the straights and we can use that.”