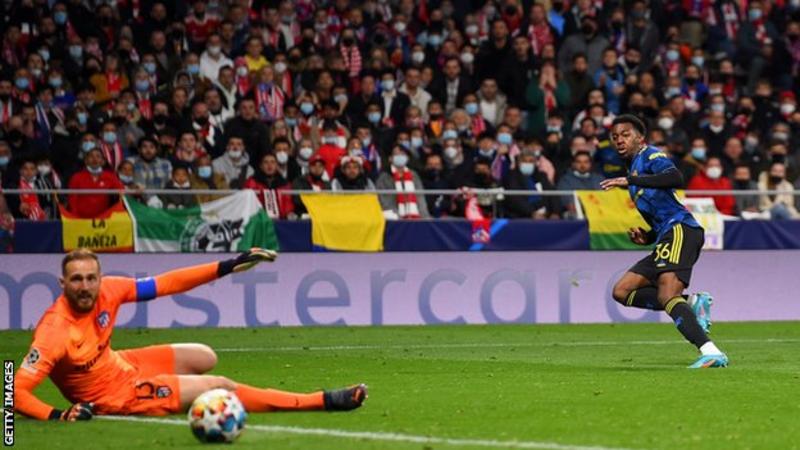 Anthony Elanga says he has “dreamt of moments” like his late equaliser in the the first leg of Manchester United’s Champions League last-16 draw at Atletico Madrid.

The 19-year-old had been on the pitch less than six minutes after replacing Marcus Rashford, when he raced onto Bruno Fernandes’ perfectly-weighted pass to roll the ball past home goalkeeper Jan Oblak with his first touch to earn his side a 1-1 draw.

“I told you how calm and cool I am and whenever I am given a opportunity. I want to repay the manager and give 150% every time I step onto the pitch,” Elanga told BT Sport.

“I just do what I can do, I want to be the best player on the pitch and I appreciate the boss.

“He [Ralf Rangnick] said to me to make the defenders scared and run in behind when I get the opportunity.

“I have dreamt of moments like this, scoring in the Champions League against top European teams like Atletico Madrid, [it is] a dream come true.”

Until that point it appeared as though Diego Simeone’s Spanish champions were going to take a narrow advantage to Old Trafford after delivering a masterclass in controlling the game without the ball.

Rangnick later conceded that his plan “was in the dustbin” after seven minutes with the Swedish central defender, who was uncomfortable throughout, being booked for a tug on Felix before his second-half withdrawal.

By then Atletico should have been two goals ahead with Sime Vrsaljko heading the ball off Lindelof and onto the United bar in the closing moments of the first half after some more dismal defending.

While Rangnick’s side enjoyed plenty of the ball, they were slow and indecisive in possession and barely looked capable of carving open their well-drilled opponents who repeatedly picked off every sloppy United pass in midfield.

Atletico were also unlucky to not score late on themselves when Antoine Griezmann rattled the visitor’s crossbar.

However, Elanga, who missed the crucial penalty when Rangnick’s side lost in the FA Cup to Middlesbrough earlier this month, followed up his goal at Leeds on Sunday with another important intervention to change the complexion of the tie before the second leg in Manchester in three weeks’ time.

“He is playing as though it is a dream come true,” Rangnick added. “It is a joy and fun to watch him play, I wish a few other players would take him as an example and as a role model.”