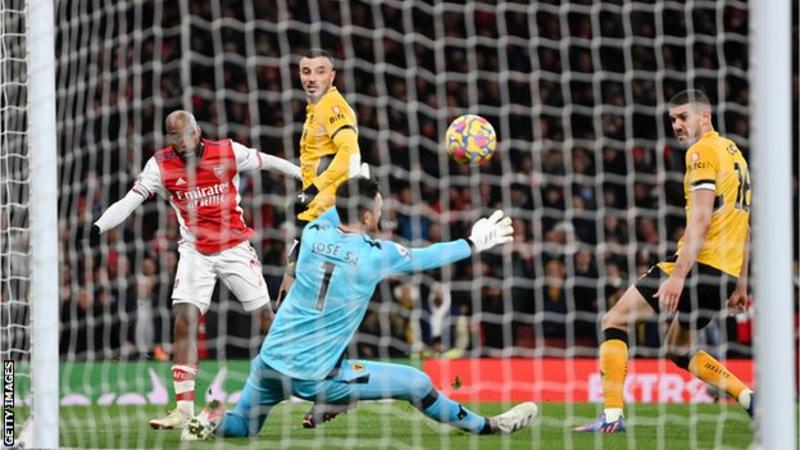 An own goal from Wolves goalkeeper Jose Sa helped Arsenal complete a dramatic late turnaround in their pursuit of a top-four Premier League place.

For long periods Hwang Hee-chan’s early effort had looked like being decisive for the visitors.

However, Arsenal substitute Nicolas Pepe levelled from Eddie Nketiah’s pass towards the end of a dominant second period in which the hosts had continually pressed for an equaliser.

And as the clock ran down Alexandre Lacazette’s effort was inadvertently touched into his own goal by Sa to spark wild celebrations inside the Emirates stadium.

The result sees Mikel Arteta’s side move up to fifth in the table, just one point behind fourth-placed Manchester United, with two games in hand, while Wolves who were hoping to further their own Champions League ambitions sit in seventh.

“We don’t know today how important this will be but we know the importance of winning our matches,” said Arsenal manager Mikel Arteta, who is aiming to guide his team back into Europe’s elite club competition for the first time in five years.

“At the end of May we want to be fighting for those places. After three defeats in the first three games, we had to avoid relegation.

“Then we took it game by game and don’t lose sight of the objective with the team. You just have to be consistent with your vision and the way you prepare and believe the result will come.”

Bruno Lage’s side had gone into the contest searching for their sixth win in seven top-flight matches and a fifth successive away victory in the top flight for the first time in 42 years.

They looked well on course when their South Korea international Hwang stole in front of Arsenal goalkeeper Aaron Ramsdale to score from a tight angle early on from Gabriel’s misplaced back pass.

But while they defended resiliently for long periods, Hwang’s miss just after the break and Pedro Neto’s errant late shot with the score at 1-1 proved costly.

While Wolves may point to missed opportunities, they can ultimately have few complaints over the manner of their defeat.

With Arsenal enjoying more possession and registering more than four times as many shots in the contest, Lage’s side were made to pay for their inability to retain the ball long enough to relieve the pressure they faced, particularly after the break.

Romain Saiss, Conor Coady and Ruben Neves all made telling clearances over the course of the match and will feel aggrieved that their efforts did not bring at least the reward of a point.

Arsenal though should be lauded for their persistence and the belief they retained that they would finally break through a stubborn Wolves defence.

Wolves goalkeeper Sa had been rarely tested until he repelled Lacazette’s 72nd-minute effort at point-blank range but from there the visiting goal came under increased threat.

Pepe’s deserved equaliser came at the end of a flowing move down the right, with Ivory Coast winger expertly placing the ball past Sa and Gunners midfielder Martin Odegaard hit the woodwork before they found a late winner.