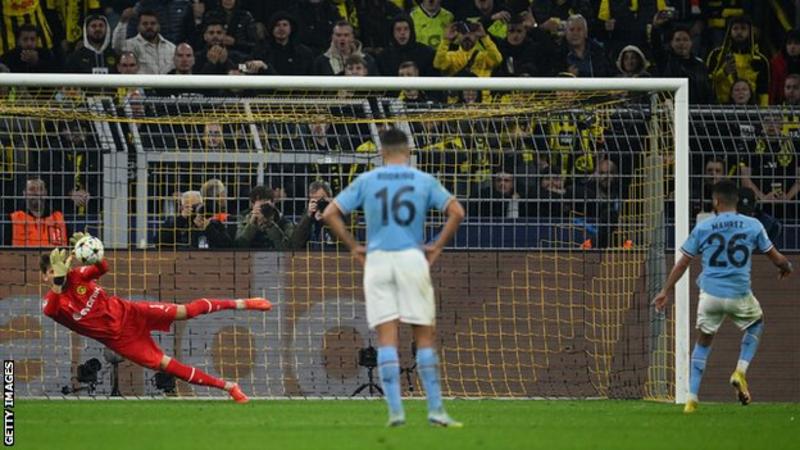 Manchester City boss Pep Guardiola admits they have a “problem” with penalties as they sealed top spot in their Champions League group with a 0-0 draw at Borussia Dortmund despite Riyad Mahrez failing from the spot.

City have failed to score 25 of their 80 penalties, excluding shootouts, since the Catalan took over in 2016.

Mahrez was fouled by Emre Can and stepped up himself, but Gregor Kobel went the right way to save his kick.

Borussia Dortmund also went through to the last 16 with the draw, so both sides will be happy with the result.

“Since I’ve been here we’ve missed 25 penalties, most of them in the Champions League,” Guardiola said.

“It’s too many. You always have to admire the courage, but missing so many penalties is a problem.

“We have to improve. It comes down to fine margins in this competition and these situations can make the difference.”

Former Scotland forward James McFadden, watching the game for BBC Radio 5 Live, said: “I think it was a very good penalty from Mahrez. It’s a side foot with a lot of power, what a save.”

Mahrez has now missed three of his past four penalties for City, after scoring nine of his first 10.

City boss Guardiola surprisingly replaced top scorer Erling Haaland at half-time after just 13 touches. He revealed afterwards that the Norwegian had a fever and a knock.